Thursday 7 May is UK election day. Find out what it means for physio staff in our election special. 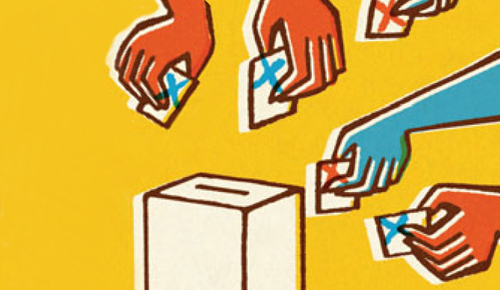 Our guide gives a run down of where the different political parties in Westminster stand on some areas of policy that will directly affect CSP members – in particular the NHS in England and rights at work UK-wide.
We focus on those parties with policies for England who are also fielding candidates elsewhere in the UK. We also give a brief analysis of the policies of the other parties in devolved nations with seats in Westminster.
The next Westminster government will decide what health and care services look like in England only.

The outcome of the 2015 election is being presented in the media as one of the most complex in years. We’re voting in a UK-wide government. Yet decisions on health in Northern Ireland, Scotland and Wales are devolved, while NHS England is answerable to Westminster.

There are differences around NHS funding and the role of the market, but a political consensus to shift of resources from hospitals to the community and more integration of health and social care.

The picture is further complicated because the traditional bases of support for the Conservatives, Labour and the Lib Dems have changed, with smaller, newer parties benefiting from this.

And there is a growing appetite for devolution, affecting voter intentions and the role voters in Scotland, Wales and Northern Ireland want their representatives in Westminster to play.

It is almost inevitable that further devolution will be agreed by the next UK government – for example on powers to raise taxes. There is also a drive for English regional devolution, illustrated by the deal to devolve the NHS budget to Greater Manchester.

A hung parliament, where no single party has overall control, is being mooted in the media as the most likely outcome.
The party with the most support then has two choices: to form a coalition with one or more other parties or to be a minority government, seeking agreements from other parties to give them limited support. In either scenario smaller parties may have a growing influence.
The Lib Dems are open to coalition, whether it’s with the Conservatives or Labour. The Green Party has ruled out a coalition with Labour or the Conservatives.
But it has been in discussion with the Scottish National Party (SNP) and Plaid Cymru about an alliance to influence a Labour minority government on public spending.
UKIP’s leader suggested they might enter a coalition with the Conservatives and Northern Ireland’s Democratic Unionists Party (DUP) if there is a quick referendum on Europe.

How parties in Northern Ireland, Scotland and Wales might affect Westminster

Northern Ireland
Northern Ireland is run by the executive, which has a power sharing arrangement between five parties, three of which have seats in Westminster.
The Democratic Unionists Party (DUP)  has ruled out any coalition in the Westminster government. It is open to an agreement with either the Conservatives or Labour – providing the bedroom tax is abolished and defence spending protected. It supports cuts in public spending and favours a market model in the NHS.
Sinn Fein is continuing its policy not to take up seats in Westminster, thereby ruling out coalition or alliance. In Northern Ireland it supports an increase in public spending, opposes a market model for health, and wants greater legal rights to trade union recognition and collective bargaining.
The Social Democratic and Labour Party (SDLP) would go into coalition with Labour and the Scottish National Party. Its policy is to reverse spending cuts. It has opposed the market model for the NHS in Northern Ireland.
Scotland
The Scottish National Party (SNP) governs Scotland on devolved matters.
The SNP has ruled out any electoral deal with the Conservative party at Westminster. The Labour party has ruled out a formal coalition with the SNP, but the SNP may support a minority Labour administration if there is enough common ground.
The SNP has held talks with the Greens and Plaid Cymru about working together in Westminster. It proposes that the next Westminster parliament increase spending by £180 billion on public services and opposes the market model for the NHS. It agreed a one per cent pay increase for NHS staff in Scotland for 2015/16.
Wales
The Welsh government is Labour-run.
In Westminster, Plaid Cymru (Party of Wales) has not ruled out joining a Labour-led coalition.
It has also been in discussion with the SNP and the Greens about a possible alliance. It proposes Westminster support a 0.5 per cent increase in public spending from 2016/17 and legal changes to give stronger rights at work, strengthen collective bargaining and trade unions. It supports an increase in spending on health and opposes the market model for the NHS.