Physio Rachael Machin doesn’t pull her punches when it comes to tackling equality and diversity issues. 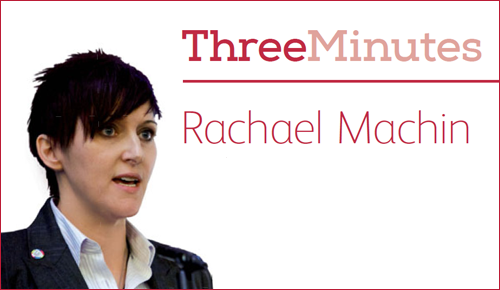 Has promoting equality always been important to you?

From a very young age, I was strongly influenced by my Mom as regards to equality. During her career as a teacher, she was always very equality driven; teaching English as a foreign language to the Asian community in Birmingham, then working within the traveller community in rural settings, as well as working with children and young people with special needs. When I learnt about apartheid as a teenager, I wanted to know more about the black consciousness movement, and my Mom bought me a copy of anti-apartheid activist Steve Biko’s book I Write What I Like for doing well in my GCSEs.
Understanding inequality and its effects on individuals and society made me determined to address this in my own work. In my first physiotherapy post at City Hospital in Birmingham, I learnt Punjabi so that I could communicate better with patients who didn’t speak English as it could be difficult to get hold of interpreters. I always try and aim to create a level playing field.

Did that motivation influence your career choice?

I wanted a job that made a difference and decided I wanted to be a physiotherapist when I was 15. I’ve had jobs in the NHS since I qualified. Equality and diversity are at the heart of the NHS, so it’s the right place for me to work. Inclusivity is also fundamental to what I do with my evening Pilates classes. I create an environment where fit athletes can exercise alongside those with long-term conditions; everyone gets on and enjoys the challenges of the class.

Tell us about the CSP LGBT network

I first got involved with the Lesbian, Gay, Bisexual and Transgender (LGBT) network in 2008 as I felt that I didn’t fully understand the issues and obstacles that LGBT people face in the workplace. I learnt a lot by attending meetings and became convenor of the network in 2010. The LGBT network has gone from strength to strength over the last few years, which is purely down to the passion and commitment of our members. We have a strong presence at the annual TUC LGBT conference which has raised the profile of the CSP with other unions.
As a network, we are politically active around a variety of issues, not just LGBT or equality-related subjects.

How do you find the time – having a demanding work life and being a single parent?

You have to be super organised. By day I am an NHS occupational health physiotherapist, I teach Pilates in the evenings, in addition to looking after my son who has type 1 diabetes. As well as being the convenor for the LGBT network, I am also the vice chair of the CSP’s equality and diversity group, and am equality and diversity representative on Council.

The CSP wants members to answer a question on sexual orientation on their member profile. Why?

This comes from an decision made at the annual representative conference (ARC) in 2014. It is designed to build up a more accurate picture of the make-up of CSP membership so that we can monitor levels of participation. This can range from involvement as a steward or safety rep to membership of CSP Council and standing committees to attendance at ARC and Physiotherapy UK. Only by having this information can the CSP identify under-represented groups and take action to make sure that all members have a voice. Monitoring always sparks debate, but I would reassure members that this isn’t the CSP being nosy – it’s about ensuring that under-represented groups are encouraged into activism and by giving them a voice within the CSP. I urge all members to check their online profile is up to date.

We hear you have an interesting hobby. Tell us more

I’m an ABA (now England Boxing) qualified boxing tutor as well as a Les Mills body balance instructor, so if I’m not on a yoga mat, you may find me with a head guard and a pair of boxing gloves on. fl