Cricket fans will be flocking to next week’s opening Test Match with India. England’s lead physio Ben Langley tells Frontline about his role. 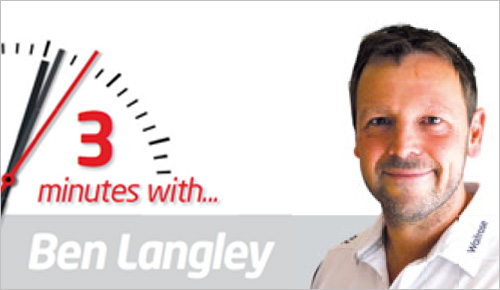 The first Test with India starts next week. Is there a buzz?

There is no doubt that this is of huge interest. This series is one the most important for the year.  I was fortunate to be part of the touring party to India in 2012 when England won 2-1 after losing the first Test. This was the first Test series win there for 28 years so it was an incredible effort by all involved.   The support from the public is so passionate in India and every waking minute was consumed by it. Both countries will have a number of fresh faces and, with both teams being similarly ranked at present, there will be huge competition to win.

How do you prepare the players and how big is the physio and medical team?

The England team is a continuously travelling setup with players and staff being on the road for at least 250 days a year.  The opportunity for the team to prepare together can be limited so they will all play in a number of domestic First Class fixtures leading in to the international Summer calendar.  The board’s relationship with the science and medicine (S and M) teams at each county is very important as they usually deliver the majority of service to the players when not directly with the England team. Further to the physiotherapist, the England S and M support staff also comprises a full-time sports doctor, strength and conditioning coach and soft tissue therapist.   There is regular direct contact with a performance psychologist predominantly during preparation phases.  Each discipline is supported by a national lead.

Do you have to be an amateur psychologist at times?

In every role I have held as a physiotherapist, you must develop a relationship with your player, athlete or patient. They need to believe in you and you must understand what makes them tick.  Only then can you be effective in how you add to that player’s physical preparation and injury management. Given that you spend a lot of time with players, both on and off the treatment table, it is important to be engaged with the doctors and psychologists in wellbeing management. Physiotherapists can greatly facilitate the recognition and support processes in cases where players are finding it tough.

What is your workload like during a Test match?

There is a week of long hours with at least two days of training and preparation before the Test begins. Typically, the S and M team arrive around 8.30am before the match begins at 11.  By the time you manage the needs of players you don’t leave the ground till at least 7.30pm, most likely picking up a player or two later that evening for further treatment.   There can be periods when the team is fielding when you can simply watch the match but that’s usually when the coaches ask for their maintenance work!  Cricket has strict anti-corruption regulations restricting the use of any communication devices at the ground during the hours of play so phone calls and emails have to be chased up at the end of the day, adding to your evening workload.

Do you, or did you, play cricket or others sports?

I played cricket from the age of nine and really love the game. It also helps you appreciate the physical demands involved in areas like fast bowling.   It also helps if you can throw and catch, as this gains you some respect immediately with the players if you don’t turn and flinch when the ball comes hurtling at you. As the England team physiotherapist, you struggle to get any consistent spare time so you sneak in what sport you can for yourself.

What advice would you give someone who’s keen to follow in your footsteps?

The road to getting a great job in sport takes time so you have to be patient.  You need to spend as much time learning from other practitioners as from textbooks or journals. A few weeks ago I heard someone say that practice-based evidence is as important as evidence-based practice, which I believe in.  You must spend time observing other experienced physios, and others such as osteopaths and soft tissue therapists for that matter, as you will always pick up a ‘little gem’ from everyone. Importantly, be very good at the basics.  Part of my job now is to ensure that Craig de Weymarn (my successor as team physio) achieves time away from the sport.

Ben Langley is national lead for physiotherapy, England and Wales Cricket Board. He oversees the performance pathways for the men’s, women’s and disability programmes.