Jane Heywood has a significant feather in her cap – she has been appointed as a regional healthcare adviser based in Germany. 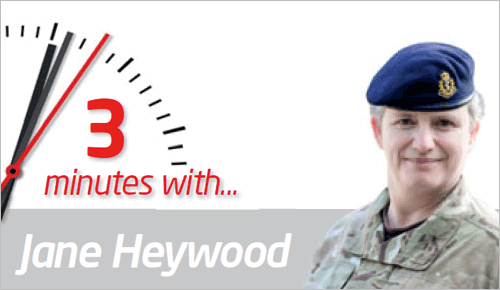 What does a regional healthcare adviser do?

We have a fully commissioned health service for the military community in Germany. I act as a contract monitor and interface between the contractor and military community, including civilian staff and families. A significant part of the role is liaising with the contractor staff who are civilian and the military chain of command to ensure that both parties work together to ensure the best utilisation of our medical assets. In addition I liaise with our assurance team to ensure that we are working with the contractor to constantly strive to improve the quality of the service.

Is it unusual for a physio to hold such a post?

This is a post unique to the British forces in Germany. The role requires an understanding of primary and secondary healthcare, with previous experience of working with British forces in Germany being beneficial. I have undertaken previous posts in Germany and established the regional rehabilitation unit at Hohne so was delighted to be offered the post. Another key advantage is the opportunity it affords to maintain my clinical currency. Completing my doctorate in 2010 exposed me to working at a higher academic level. I feel my appointment has demonstrated the wider employability of physios in roles that may not have been available in previous years.

What are the challenges?

The biggest challenge is understanding the nuances of the contract and the advisory nature of the role. It is essential to develop an effective working relationship with the contractor at all levels of the organisation.
Previously the military was responsible for delivering the service so it can be difficult to resist the temptation of providing solutions as opposed to letting the contractor solve the problem. It is important to have credibility with all parties and understand the issues from the differing angles. Every day is different and the ability to problem solve and manage a complex workload is key.

Feeling part of a team and being able to contribute to ensuring that we have a high-quality healthcare service for our population.

The contract has been in place for 18 months and I am proud of my achievements in facilitating the working relationships in my region between the contractor and our military population.

Any tips on getting into senior roles?

Develop a breadth of knowledge and be prepared to move out of your comfort zone. Use all opportunities to network, both within rehabilitation and in wider healthcare. You never know when those contacts will prove invaluable.

Did you always have a yen to join the army?

I initially joined the army in 1984 and worked with the Royal Signals in UK, Cyprus and Germany. I left and qualified as a physiotherapist from Northumbria University in 1992.

I was commissioned into the Royal Army Medical Corps in 1993 and subsequently worked in the UK, Germany and Northern Ireland, with operational tours in Bosnia and Iraq. I have worked at a training regiment with recruits, as a superintendent physiotherapist in secondary care and developed an extended scope practitioner (spinal) post at Haslar hospital in Hampshire in 2000.

I was promoted to lieutenant colonel in 2008 and have since worked at the Defence Medical Rehabilitation Centre, Headley Court, Surrey, and in a staff appointment at the headquarters surgeon general department in Lichfield, Staffordshire.

How do you relax?

I have a rather elderly German shorthaired pointer, called Kaiser, and we enjoy travelling around the lesser known tourist destinations of Germany  in my VW Campervan. I also have a passion for football and have a season ticket for the German Bundesliga team Hannover 96. Improving my German is an ongoing challenge! fl