Robert Millett meets a physiotherapist whose collaborative work is helping patients to get back into the water after a tracheostomy. 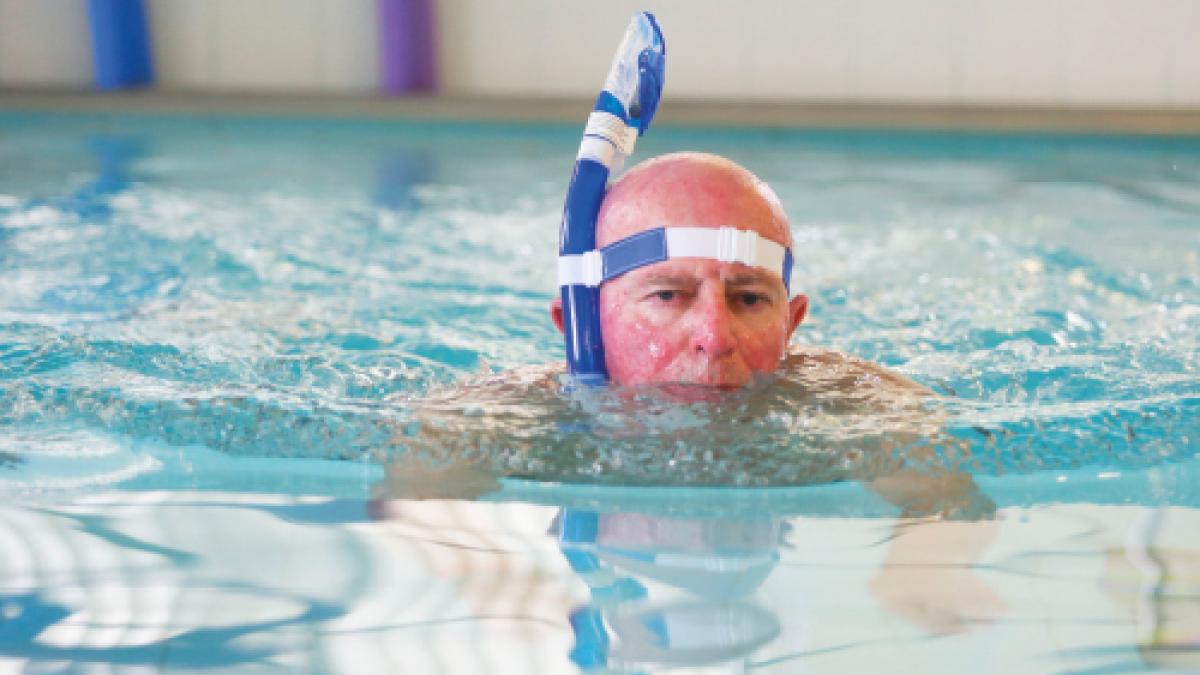 People who experience an injury or illness, such as a head or neck cancer, sometimes need a tracheostomy – an operation that allows them to breathe through an opening, or stoma, in the front of their neck.  These patients have traditionally been unable to go swimming or receive hydrotherapy treatments due to the risk of water entering the lungs through the stoma.
But over the past year a physiotherapist in Devon has collaborated with specialist head and neck nurses to develop an innovative service that resolves this issue.  They train patients and their carers to use a device that allows them to go into a pool, swim above the surface and even totally submerge themselves.
Physiotherapist Bev Brodbelt is team lead for rheumatology and hydrotherapy at Royal Devon and Exeter NHS Trust.  She works at two sites in Exeter – Heavitree and Wonford hospitals – and has been at the trust for 13 years.  Her day-to-day role is mainly clinical, treating outpatients on both dry land and in the hydrotherapy pool, as well as teaching junior staff and liaising with consultants.
But outside her clinical time Mrs Brodbelt has also been helping to develop and run a nationwide pilot service that aims to enable neck-breathing patients to swim again.  She explains that there are more than 5,000 ‘neck breathers’ in the UK, according to estimates from the National Patient Safety Agency (http://bit.ly/2kNs09).  Meanwhile surgeons perform about 900 laryngectomies, in which the larynx is removed and a tracheostomy carried out, every year.
Research, including a 2005 study conducted at Santos Metropolitan University in São Paulo, Brazil, indicates that patients who breathe through their necks after having a permanent tracheostomy or laryngectomy appear to have relatively low quality of life (QoL) scores. (See link at end of article.)These relate to communication issues, reduced social interaction and an inability to take part in shared leisure activities – such as swimming.
With this in mind, in 2014 specialist head and neck nurses at the trust became aware of the Aquather, a unique snorkel and/or mouthpiece device produced by German company Heimomed.  The product has been used by tracheostomy and laryngectomy patients in Germany to enter safely into water environments and the nursing team wondered if it could also benefit their neck breathing patients.
As a result, the nurses secured funding to travel to Germany to meet the Aquather’s manufacturers and receive training in using it.  They also liaised with Mrs Brodbelt to gain a hydrotherapy perspective and devise a service plan: ‘We spent about a year developing the service, making sure that we were really competent with the product and evaluating the evacuation process and manual handling policies,’ she says.
Last March the trust launched a one-year pilot and since then the service has trained more than 20 patients to use the Aquather snorkel, which allows people to swim with their head above the water, and the Aquather mouthpiece, which enables underwater swimming.
The service specifically targets cancer patients and has received funding from local charity FORCE (Friends of the Oncology and Radiotherapy Centre, Exeter) Cancer Support, to support patient and staff training costs – including the trip to Germany – and UK charity Macmillan Cancer Support, which has provided eligible patients with grants to cover the cost of the device and to help meet travel expenses.  The opportunity to learn how to use the device is open to UK residents, over 18, who can communicate effectively and make their own decisions.
‘We’ve had people come from all over, including Scotland, Sussex and Northamptonshire – and only a few from Exeter itself,’ says Mrs Brodbelt.  People attending the service receive a single session that trains them to use the Aquather device, which attaches to the tracheostomy site and stops water flowing into the lungs. ‘This enables patients to either swim or have some hydrotherapy treatment,’ says Mrs Brodbelt.
These types of activity were previously off-limits for patients with tracheostomies or laryngectomies. ‘It was just too dangerous, because they don’t have any reflex to stop water going into their lungs,’ Mrs Brodbelt explains.

Each training session lasts about 60 minutes, the first 30 minutes of which are spent teaching the patient and their carer how to fit the Aquather in a safe manner. ‘Then they have half an hour in the pool, with either one of the nurses or myself, again showing them the safety procedures – making sure that it is completely safe and that they’re happy with it.’
Mrs Brodbelt and the nursing team have undergone a series of in-depth risk assessments to ensure patient safety.  This has included regular high-level training updates in airway management, life-support and emergency evacuation techniques. In addition, Mrs Brodbelt has trained the nurses in how to perform fast, safe and effective evacuations from the hydrotherapy pool.
In the event of any emergency – such as a leaking device or a patient feeling faint or becoming unconscious –  team members are able to pull a cord that alerts an emergency ‘crash’ medical team that can arrive on the scene within a few minutes.  But in the intervening time period the Aquather clinical team has learnt to quickly strap a patient to a Kiefer rescue board, transfer them out the pool and on to a plinth and provide emergency life support.
Mrs Brodbelt says the Aquather sessions can prove to be an emotional experience for all involved, as patients are often overjoyed and ‘a lot of raw emotions kick in’. ‘There are often tears involved, either from the carers or the people themselves,’ she explains. ‘These people have been told they can never go in the water again and then suddenly we are enabling them to get in and swim underwater, and it’s absolutely brilliant to see.’
While data is still being collected the service has already received positive patient feedback, with reports of increased health benefits, improved quality of life and enhanced holidays – as well as priceless experiences such as swimming with their grandchildren for the first time.
‘One young woman, who came to see us with her son, used to do a lot of swimming but hadn’t been able to for years, due to her tracheostomy,’ says Mrs Brodbelt. ‘She loved being back in the water and the following week she joined her local sports centre, and they gave her son free membership – because he needs to go in the water with her when she’s using the Aquather.  And now they are going regularly, which has obvious health benefits.’

Mrs Brodbelt hopes the service will continue past the pilot stage and also begin to explore the potential benefits that hydrotherapy might provide to people with tracheostomy and laryngectomies. ‘The service is completely changing people’s lives and it’s already enabling them to have treatment elsewhere if they need it – as after seeing us they can explore having hydrotherapy in their local area.’
The pilot service has predominantly focused on post-cancer patients, but Mrs Brodbelt says there are many other long-term tracheostomy patients that it could open up to in the future. The team also plans to follow up each patient after a year to collect data on the long term effect of the service and use of the device. ‘Because it’s so new we don’t know how it will work in the long term, how frequently people will use it and whether it will need replacing after a while,’ Mrs Brodbelt explains.
Her advice for other physios who might be interested in developing a similar service is to ‘step out of your own environment and reach out to others’ so that common goals can be reached by different professions. ‘I think this development has been an excellent collaboration between multidisciplinary clinicians and across a variety of teams,’ she explains.
‘It has included head and neck nurses, who I do not usually work with, consultants from intensive therapy unit, charity representatives, manual handling and resuscitation leads.  And we have all worked together to create a service that is almost miraculous for some people. In the long term she would like to develop a teaching package to help other trusts to provide a similar service. ‘But first we need to complete our pilot.’fl

One patient said: ‘I cannot thank you enough for all the help and support you have given me.  Swimming is a great pleasure of mine and your hard work and dedication has given me back that enjoyment, along with my confidence and self-esteem.  For that I am forever grateful.’
While another said: ‘A huge thank you for giving me the opportunity to achieve so much, particularly in terms of confidence and opening new doors for me and living life to the full.’