Fit for the future: how healthy and active are our children? (report)

This 2009 report by the Chartered Society of Physiotherapy finds that significant numbers of children do not do enough exercise and face poor health as adults.

More than a third of children could face significant health problems in adulthood unless more is done to encourage families to be more active. 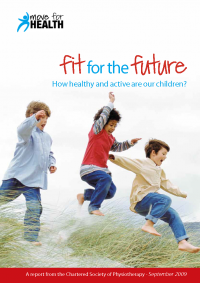