Summer 2021 members’ survey: the results are in

The results of this summer’s CSP members’ survey are in, providing a comprehensive snapshot of the engagement of members with the CSP, alongside detailed insight into the diversity of the profession. 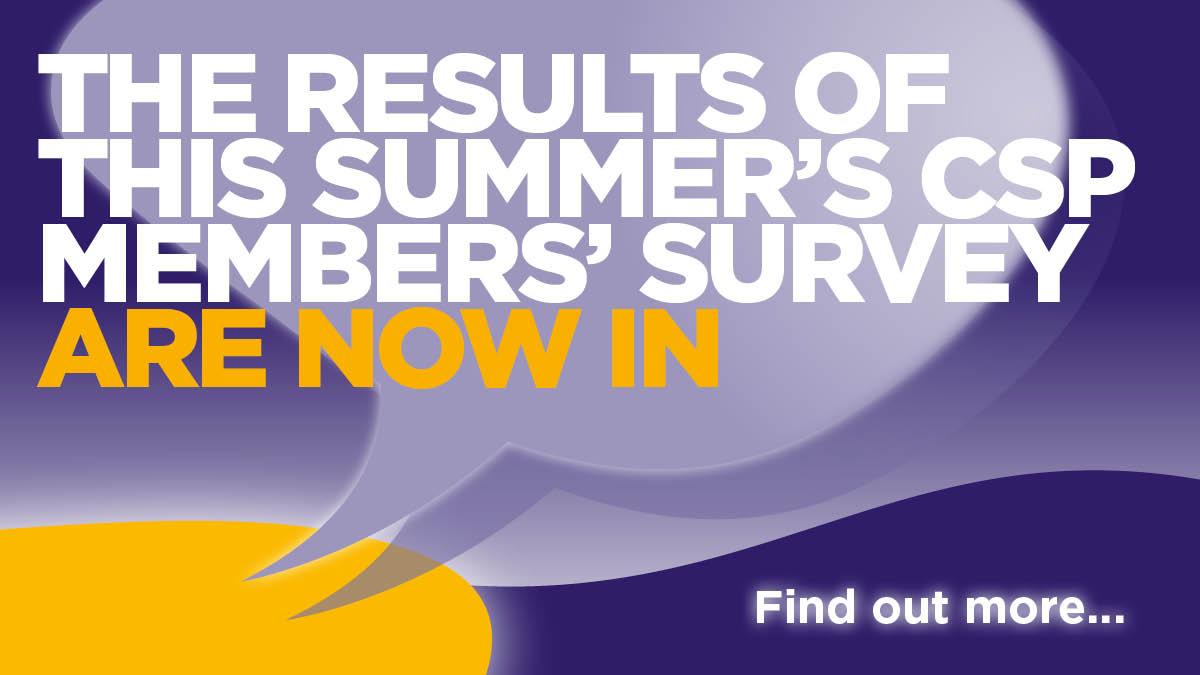 The survey has also provided an invaluable understanding for the CSP of perceptions and engagement with its current campaigns, alongside pressing issues for members, including practice education, workforce development, first contact practitioners and flexible working.

The results of the survey are based on analysing the responses of over 2,500 members, based on an online survey which was emailed to half of the CSP’s membership who have valid email addresses. The demographics of respondents closely mirrors the CSP’s membership profile, meaning that the findings are representative of the whole. We’ll be conducting another survey to the remaining half; if you didn't get a chance to have your say on this survey, we'll be sending a new survey your way this week.

'Overall, the results of the survey are very positive, while also clearly showing areas where the CSP can improve,' said Rob Ledger, CSP assistant director for strategic communications. 'Thanks to all the members who took the time to complete the survey and we will continue to report specific actions arising from this survey as they are implemented.'

If you would like to discuss the survey and the results further, email our membership insight analyst Olafunke Oreyomi

What CSP members told us

To measure the level of activism and engagement with the CSP, we asked our members if they have served in a formal CSP volunteer role in the last 12 months. Nearly one in ten of respondents have: much higher than the membership average.

Just over half (56 per cent) of respondents choose to support the CSP in other ways – from sharing knowledge and encouraging and influencing other members to promoting equity and diversity.

Respondents who stated that they haven’t yet volunteered may have previously served in a volunteer role, are busy or are volunteering with other organisations.

Members who volunteer or support the CSP’s work have a high satisfaction and value for money score. They are also more likely to agree that we have a local presence.

Average satisfaction with membership among members was seven out of ten.

Positively, the average rating for value for money with the CSP for members has increased, to six out of ten.

Members felt there were some areas where the CSP could improve, for example by providing more teaching resources online and increasing the number of professional development webinars, alongside support and representation for all sectors, employment types and specialisms.

The CSP’s main communications channels – the website, the weekly Physiotherapy News email bulletin, Frontline and interactiveCSP – were all rated positively by members. YouTube and Facebook were rated less satisfactory, suggesting that the CSP could do more on these channels to maintain engagement with members.

Nine per cent of CSP members responding to the survey and who have one or more protected characteristics have experienced harassment, victimisation or discrimination in the last 12 months while working, seeking work or studying.

'The data gathered this quarter on the number of members who report having experienced discrimination at work, when seeking work or when learning, will be critical to implementing the CSP’s equity, diversity and belonging strategy,' said Claire Sullivan, director of Employment Relations and Union Services (ERUS).

Along with the data we gathered from members in late 2020, this enables us to set a baseline for our work to eradicate discrimination at work and college.

'As we develop our targets and measures we may want to ask more specific, targeted questions in future surveys. However, we also have to be mindful that samples become very small if we break responses down too specifically.

'For CSP members who have ever experienced harassment, victimisation or discrimination and need help, your CSP steward or safety rep will always be your first point of contact – they are there to help,' she added.

Half of respondents agreed that the CSP is currently present where they live, work or learn. There was a link between members who support the CSP’s work and members who agree that it has a local presence. These respondents also have a high satisfaction and value for money score – an average of 70 per cent of respondents who agree were satisfied with their membership and would recommend CSP membership.

'Currently, there is a disparity in the support available and no standardised training for physiotherapy practise educators,' Reena Patel, CSP education adviser, commented on the results.

We are working on a project which aims to share best practice across the UK and support practice educators to create an optimal learning environment.

'The data will be analysed to determine what support is available for practice educators, including any barriers and then provide resources that will complement and add to the existing provision.'

However, the survey was clear that there is a large, unmet desire for flexible working from CSP members.  Asked about their future career plans, 37 per cent of respondents indicated they would like to work flexitime – including staggered start and finish times – when performing their role.  This is despite only 16 per cent of working physios indicating they worked flexitime during the past year.

Similarly, eight per cent of members indicate they would like term-time working – where an employee reduces their hours or takes time off during school holidays – in the future, yet less than one per cent of working respondents indicated they had this opportunity in the past year.

The CSP will use this data to update its Building a Better Balance resource kit, which will be republished to address recent changes in the NHS Staff Contract, said Robin Hinks, policy and research officer.

The data will also be used to monitor and evaluate the impact of the new NHS Staff Contract. It will also inform any CSP submissions to the government’s consultation on ‘making flexible working the default’ in England, Wales and Scotland, which would benefit members both within and outside the NHS.

More respondents are aware of musculoskeletal (MSK) first contact practitioner (FCP) services in operation where they live or work, with an increase from 48 per cent in February to 60 per cent in this latest survey. Only 11 per cent of members responding undertake any work as a first contact practitioner specialising in MSK, with the majority (90 per cent) working mainly in the primary care sector, working with adults.

This reflects increasing investment in this model of care with further implementation of these roles within primary care across the UK, a key strategic objective for the CSP.

'Growing member interest in FCP from countries outside the UK demonstrates how those involved in the development of FCP services are leading the way internationally, for which they should have great pride.'

Most of the survey’s respondents (77 per cent) mainly work with adults and older people in various specialisms. Just over a third (35 per cent) are in rotation and the majority of the remaining stated that they specialise in MSK, oncology, pain management, palliative care, rehab (community, elderly and other areas), falls and frailty.

Only 13 per cent specialise in working in women’s health, children and people with disabilities.

'This summary provides crucial insight into the size and shape of the physiotherapy workforce, and this information will help us ensure members experiences are at the heart of our campaigning and influencing work,' says Natasha Owusu, CSP policy lead.

'Specifically, it will provide data that will be used in the CSPs forthcoming Physiotherapy Workforce Review. The findings of the review will support the CSP's campaigning for more physiotherapy staff to meet current demand and a more diverse workforce, and provide valuable evidence for members to influence locally.'