Just one in five NHS physiotherapy staff reported having regular asymptomatic Covid-19 testing at work, causing significant anxiety with 73 per cent saying there were worried about passing on the virus to patients, colleagues or family. 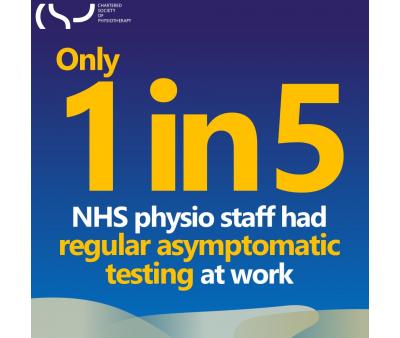 These are the findings of a survey of over 4,000 CSP members.

The CSP is warning that the NHS risks losing a significant part of its crucial workforce if testing isn’t improved – 18 per cent of NHS physiotherapy staff said they were in a high-risk or vulnerable category themselves.

It has backed a call on the government by the Allied Health Professions Federation (AHPF) for action on personal protective equipment and testing.

Previous letters to health secretary Matt Hancock earlier in the year from the AHPF have been ignored. Mr Hancock has also not replied to concerns raised by the Arthritis and Musculoskeletal Alliance.

As cases of Covid-19 begin to sharply rise across the UK, the CSP is warning that the actions of the government are now more crucial than ever as we head into the winter months and services are put under increasing pressure.

CSP chief executive Karen Middleton said: 'We are currently teetering on the brink of a second wave so it is massively concerning that we are still in this precarious position with testing not being available for health professionals who really need it. It is not only crucial to keep patients, healthcare workers, families and colleagues safe, but will also be paramount in slowing down and managing the spread of the virus. 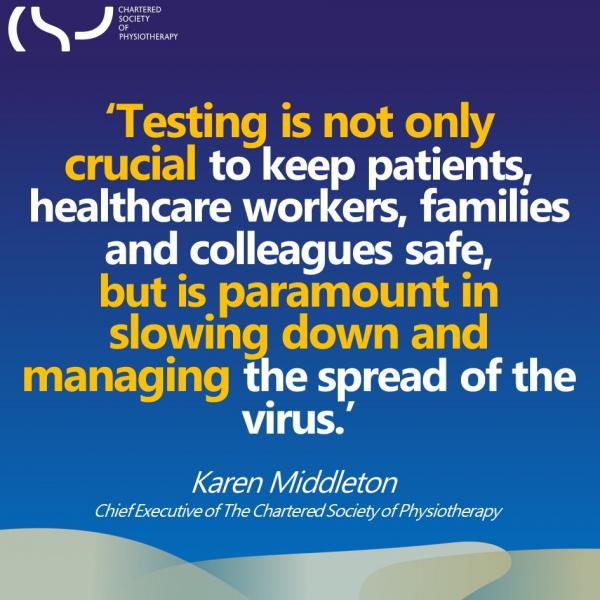 'Without it our members are telling us that they are going into work every day carrying the weight on their shoulders about potentially passing the virus to patients and colleagues or bringing it back home to their families.'

The lack of a comprehensive testing regime for staff could be damaging patient confidence as NHS services reopen, the CSP survey found, with nearly half (47 per cent) saying patients had refused treatment for fear of contracting Covid-19.

Ms Middleton commented: 'It is concerning to hear that so many patients have declined needed care because of fears of contracting the virus and our members are not in a position to fully reassure them.  This has to be made a priority by the government in all four UK countries as it has the potential to be a viscous and deadly cycle and we are quite simply running out of time to fix it.'

To date the focus has been predominantly on lack of testing for NHS staff but 89 per cent of physiotherapists working in private practice say they do not have access to regular asymptomatic testing.

They have the same concerns as NHS staff with 68 per cent saying they were worried about passing the virus on to patients and family and one in three have had patients refuse treatment because of the same fear.

The CSP has been jointly calling for weekly testing extended to healthcare staff in all settings who are:

The CSP member survey on Covid-19 was carried out between 11-22 September with a total 4,057 responses.