Physiotherapy in the news - 2019 highlights

The press office works to raise the profile of physiotherapy in the media in support of the CSP’s strategy. In 2019 we had a successful year, potentially reaching 45,900,000 people, via coverage in The Times, Guardian, Daily Telegraph, Daily Mirror, Huffington Post, Daily Mirror, Stylist magazine, the Sun, Sky News, BBC online amongst others.

January kicked off with a nod to our Love Activity campaign in the Daily Telegraph and an interview with CSP’s Research into practice officer, Fran Hallam who emphasised that it’s never too late to become more active in life.

By February the focus was on First Contact Physiotherapy with the publication of the NHS interim evaluation, drawn from the various pilot sites running across England. We set up filming for Sky News at a GP surgery in South London, to raise awareness to the general public. This story ran in the Daily Mail and The Times, and we continued to secure positive coverage throughout the year, including comment from doctors such as Miriam Stoppard in the Daily Mirror.

In the same month, we secured a double page spread in Stylist magazine which has a circulation of approximately 404,400 per week. CSP's Fran Hallam was extensively quoted throughout the piece on posture and how it affects your physical and mental health. She also featured in Waitrose magazine, which has roughly two million readers, about how exercise is a key ingredient for healthy bones in later life.

In July, CSP member Susan Young, who is on the Association of Chartered Physiotherapists in Cardiac Rehabilitation committee, was interviewed for a feature in the British Heart Foundation’s Heart Matters magazine, providing specialist advice and information for people recovering from a cardiac event.

In September we worked with Media Planet on a supplement for the Guardian entitled Taking the lead, which shone a light on rehabilitation services across the UK. It included talking heads from various organisations, and showed how technology can support people’s recovery. The supplement included an opinion piece from Ruth ten Hove on why the CSP is lobbying to improve the postcode lottery of rehabilitation services that are offered once a person is discharged from hospital. It also included an interview with CSP member Chris Tuckett on the importance of strength and resistance exercises to prevent falls.

In October we worked with journalist Jonathan Gornall on an in depth article on back pain for the Mail online. The piece helped to bust common myths around back pain and the CSP was quoted along with member Laura Finucane, who provided evidence-based information and advice for managing back pain.

In the same month, pelvic health physiotherapist Emma Brockwell was interviewed in the Telegraph about the new running guidelines she and others developed to help and support mums to get back into running safely after having a baby.

November saw CSP member Jackie Walumbe, a member of the complex pain team at University College Hospital, being interviewed for a feature in Healthy magazine. She provided expert opinion on management of chronic pain, and what role physiotherapy plays in helping people who live with it. 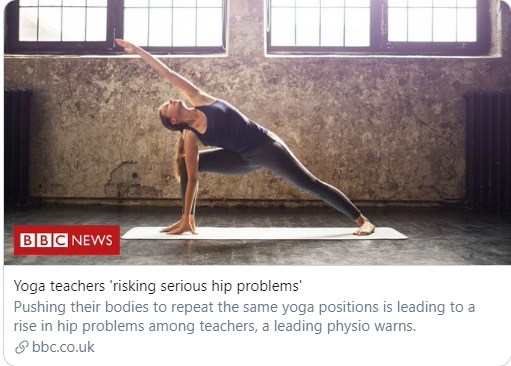 We also worked with CSP member Benoy Matthews and BBC journalist Caroline Parkinson to highlight the dangers of yoga forcing peoples’ joints into unnatural positions on BBC online, which also included a quote from CSP's Pip White. It was picked up by the Daily Mail, Telegraph, Independent, Harpers Bazaar, Vice, Guardian online and yoga magazine Om Yoga. It prompted a response from the yoga community and a discussion about how changing some of the language yoga teachers use in class might be a helpful way to stop this from happening.

In the same month, CSP member Tom Goom was interviewed in the Times online, speaking about how there are more optimal ways than stretching to improve muscle flexibility.

Finally, in December we ended the year with features on managing back pain; with an interview with CSP member Ash James in the Independent online, and expert opinion provided by Laura Finucane in the HuffPost.

CEO Karen Middleton was also quoted in the Daily Telegraph, commenting on research from the University of Oxford that found older men who have had hip and knee operations are missing out on crucial post-op physiotherapy because of their age. This story continued to run in a number of key regional papers such as the Yorkshire Post, The Southern Daily Echo and the Manchester Evening News.

Are you working on something newsworthy or do you have a physio-related story idea we could help share? Contact the CSP press office.