A physiotherapist has used the joy of competition to inspire the residents of a care home to love activity.

Piers Baker is a physiotherapist at Gloucestershire House in Cheltenham, a residential home that provides a range of services for physically disabled adults.

The home, run by UK charity Leonard Cheshire, offers residents a wide range of daily activities and encourages plenty of physical activity – including daily gym and group exercise sessions, inclusive cycling trips and the use of an aquatic therapy pool.

But, Mr Baker felt that residents could also be taking part in more self-directed exercise and activity – and reducing sedentary behaviour - if they were presented with an appealing enough opportunity and a fun incentive.

As a result, the therapy team decided to movesome static therapy bikes out of the gym and into a shared leisure space, so they could set up a cycling competition between residents from six different sections of the home.

‘We challenged them to cycle as far as they could in a month,’ Mr Baker explained.

‘And as the bikes moved from the secluded gym to a strategic spot in front of the TV, so too did the residents - as they began to appear from their rooms to take part in the challenge.

‘Residents cycled as much as they could in whatever way they could. Some used the passive leg function for 15 minutes, while others actively hammered away at the hand cycle for 30 minutes. And every meter and second counted towards their lodge total.’

One month on and Mr Baker says the results have been ‘incredible' in a number of ways.

'Collectively the residents achieved a whopping 533km total across 43 hours of cycling,’ he said.

Mr Baker explained that one participant, Adam, managed to rack up a total of 200km, which he achieved during a series of intense 30-minute sessions.

Meanwhile, another service user, Helen, amazed everyone with her efforts, after she put in 13 hours and 121kms over 53 sessions. 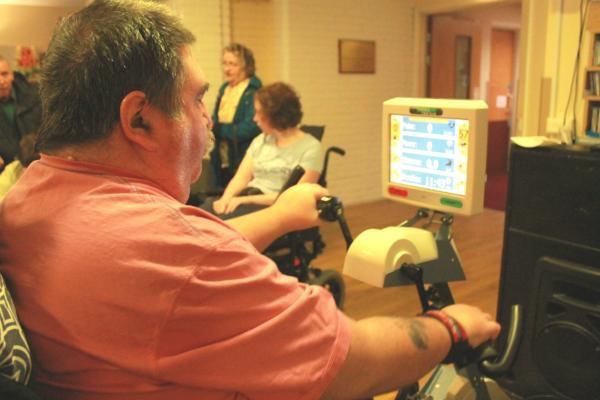 Fellow competitor, Charlotte, enjoyed a more manageable 1-2km per session, Mr Baker explained, but her consistency helped her amass 35km, putting her in joint second place in the number of sessions ranking, which totalled 17.

While Kayley cycled 50km in three hours and seven sessions and was so enthusiastic she inspired her teammates to come out ‘in full force’, with many of them saying they ‘hadn’t done this in years.’

‘What this event showed is that it isn’t just about exercise,’ Mr Baker said.

‘It’s the power of positive social change within a community that is empowering – and the other subtle components that create a culture of movement and exercise.’

Promoting a culture of fun and activity

After the competition, Helen told Mr Baker: ‘One day my friend came and watched me do it six times. And my friend Claire helped me write [my results] and I helped her onto the bike.’

She also remarked that the event had ‘got the whole building involved’ and ‘seemed to get more people on the bike.’

‘What we’ve learnt is that a little healthy competition goes a long way,’ said Mr Baker.

‘Strategic positioning of the bikes in front of the TV improved engagement, and it really enthused the residents. The results have been amazing - particularly as we know people with disabilities are at greater risk of sedentary behaviours and the associated health risks.

‘And it also inspired staff and promoted a culture of fun and activity.’

Providing a purpose and changing routine

Mr Baker believes other therapists, in school and residential settings, could create opportunities for their service users to benefit in a similar way, by locating a physical competition within a fun setting.

‘It’s empowering, as it shakes people out of their routine and gives them purpose,’ he said.

‘And the best part of our project was that most it took place outside of therapy hours and used self-reporting log books.

‘Other than number crunching at the end, I have had very little input compared to the 44 hours of direct therapy we provide.’

He added that a recording of all the residents' activity on the bikes, using an excel spreadsheet, provided an interesting evaluation of the results.

‘It has acted as a useful tool for not only sharing with service users their successes, but also for identifying improvements.

‘For instance, I found that many of the residents who required more support had less access compared to those that could easily get themselves going. So we are looking at ways to make future events more inclusive.’