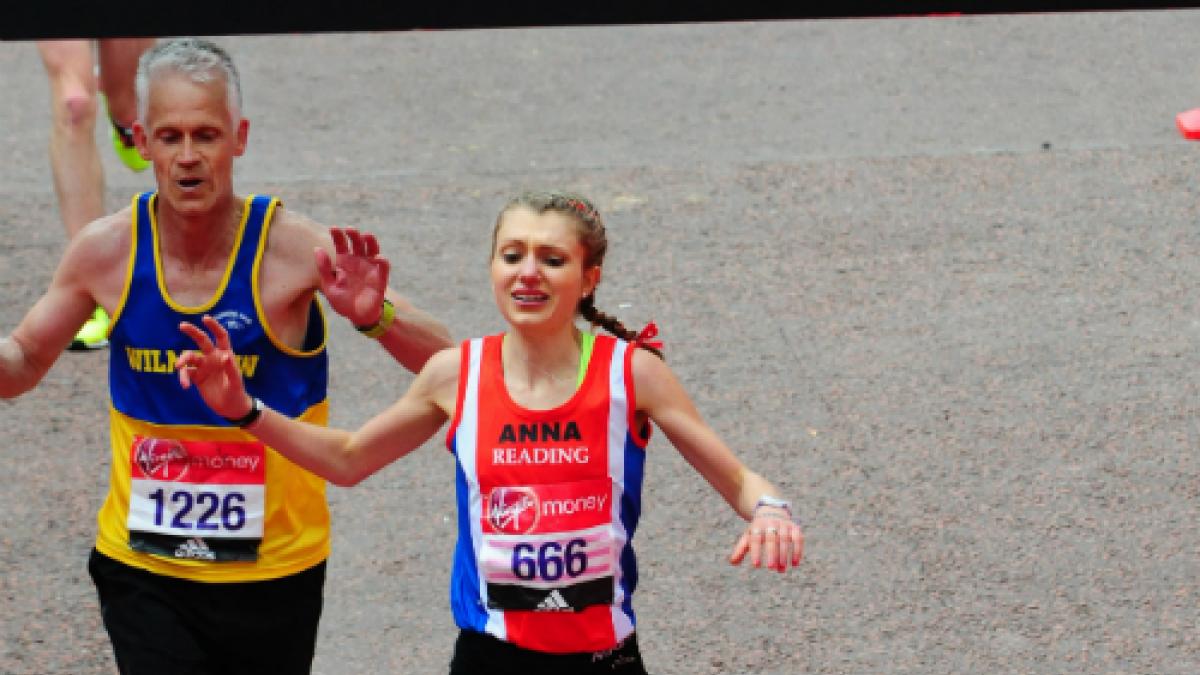 Still taking it relatively easy after completing the 26 mile-plus course in just two hours 37 minutes, she tells Frontline what it’s like to juggle her day job with her accelerating athletics ambitions.

‘A couple of years ago I was very much a middle of the pack runner, but then suddenly I progressed quickly,’ says Ms Boniface, who runs with Reading Athletics Club.

She trains intensively in local parks with a small running squad, competes in 10 km races and half-marathons and completed her first London Marathon championship race last year, coming in as the thirteenth woman.

After achieving a six-minute mile breakthrough in the Great South Run last October, Ms Boniface was a strong contender in this year’s marathon championship race. Open to top performing club runners and separate from the elite men’s and women’s event, championship runners are prioritised at the front of the masses race, she explains. It is also mixed gender, which is a boon for Ms Boniface who finds it ‘really helpful to have men to pace off’.

During this year’s marathon, she ran alongside two other women runners before realising she could outpace them. ‘All of a sudden I pulled away. You get a lot of support from the crowd when you’re at the front, and when I caught up with the men runners they kind of looked after me in a group. You get a lot of respect as a runner,’ she says. However, the last five kilometers were ‘awful’, Ms Boniface admits to coming ‘very close to having to stop’.

‘I felt very emotional afterwards. I put everything into the race,’ she adds. Overall, Ms Boniface was the fifth fastest British woman, only beaten by four of her ‘elite’ counterparts – a feat that spurred her on to set herself even more ambitious goals.

‘I’m having a bit of down time and then I’m really focusing on running more of the elite races and a marathon in the autumn,’ she says.

Continuing on this trajectory will make balancing the competing demands of work and training even harder. She aims to clock up about 112 miles a week – running for about two hours on weekday mornings and evenings and extending herself at weekends.

‘I’ve dedicated my whole life to doing this, I’m training almost to the extent of elite athletes while still doing a full-time job. This means I have to take short cuts on things like recovery time.’

But Ms Boniface is not about to say goodbye to physiotherapy. ‘I’ve worked really hard at my physio career so I want to keep that going and as an elite athlete you are always on a knife edge of getting an injury,’ she says.

Ms Boniface took up a new post last year that offered less restrictive hours. ‘I was ward-based, which meant I could be working 10 days straight. I felt I would have to change hours if I was going to take running seriously.’

Ms Boniface believes her experience and training background helps in rehab work. ‘You can start out being very average at something but with determination, hard work and self-belief you can make incredible improvements and achieve your goals. This is something that as physios we should also try and inspire in our patients when motivating them to achieve theirs.’