More physiotherapists should be trained and there are all kinds of healthcare they should be running, CSP president Professor Ilora Finlay told delegates on the opening day of the conference. 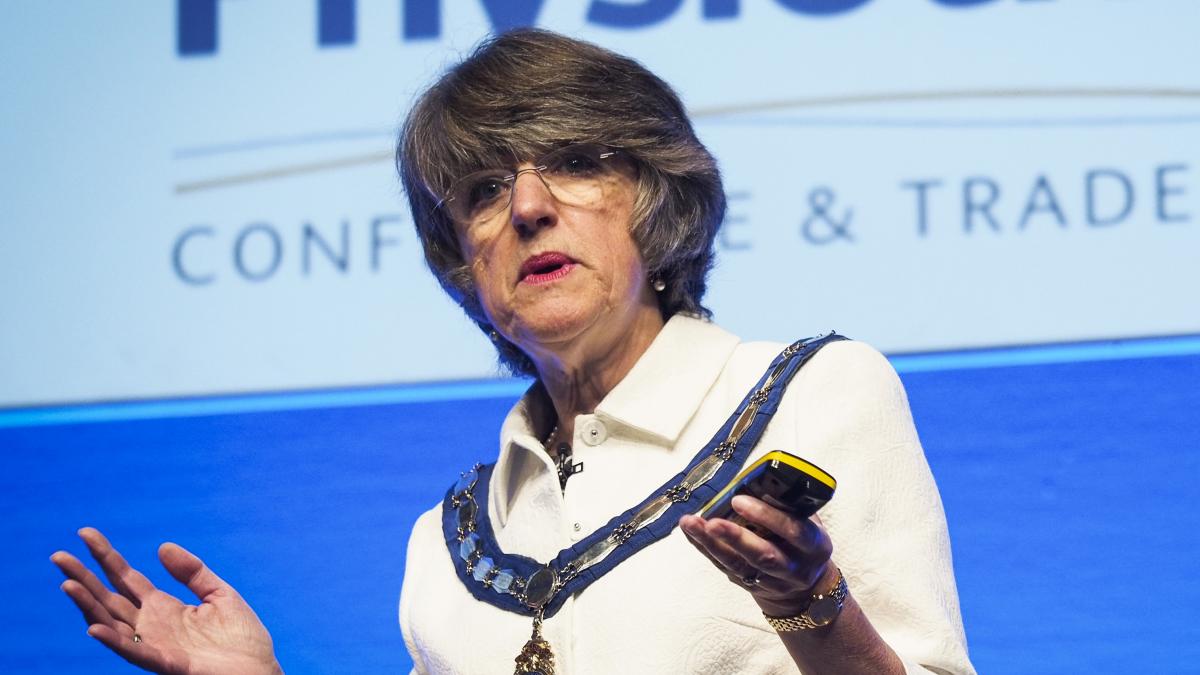 Baroness Finlay: 'The contribution of physiotherapy to the nation’s health has often been underrated.' Photo: Lorne Campbell/Guzelian

She detailed the difference physiotherapy has made to her own family and those precious to her, including when TB, viral conditions, MS and respiratory illness struck with potentially devastating effect.

Hers was a highly personal Founders Lecture at this year's event.

After a varied early medical career, Baroness Finlay set up a hospice in Cardiff, South Wales, and became the first consultant in Wales in the new discipline of palliative care.

'Going in to a hospice was viewed as a "one way ticket". The physio remobilised them; she would get them back on their feet and they could go home and live well with however much time they had left.’

‘I also became very aware that pain and distress are not just physical. In all the years that I have practised I have never known patients not to have a physical component to their pain, but often that pain experience is massively magnified by emotional, social and spiritual concerns.

'If you don’t look after the whole person you miss the real problem and waste resources. All too often, professionals have focused on one thing but haven’t looked at the whole patient.’

The contribution of physiotherapy to the nation’s health has often been underrated, she told delegates. ‘The importance to the nation’s economy is now emerging; we are all aware that if we have a fit population, they will be less dependent on health services.

'We are all aware of the importance of early mobilisation, of getting people out of those unsafe environments called hospitals, back to their less unsafe environments, with their wobbly furniture, and their bits and pieces. It is amazing how often people can get round safely within their own home.’

Baroness Finlay highlighted that the problem of money is compounded by confused messages about what the priorities are. ‘Some feel it is Care Quality Commission inspections, forms to fill in, data to collect, reports galore – but our priority must be to listen to the patient.

'There is a thread running through the many recent reports on problems in healthcare, which we should view as "always" events,' she suggested.

She said an 'always' event was to always listen.

'Many complaints arise when people feel they are not listened to – they say: "We were telling them but they just didn’t listen".

'Another ‘always’ event is responding to pain. Pain is an emergency. What we do about it varies, but to ignore it is terrible.

And the third ‘always’ event was when you were stuck, and needed to ask for help, she said.

'I think physios are good at asking for help because they’re working in teams and are used to talking to others around, commenting and saying “something isn’t right”.

‘We can have standards and  inspections galore but perhaps the only standard that really matters is “Is it good enough for your mum or your dad and your brother or sister, or the person you love dearly”? If it isn’t, do something about it.’

She viewed physiotherapists as a solution to the problems facing modern healthcare. But she implored delegates ‘get data on outcomes; research objectively for evidence of efficacy and quality and show what you do and why it is cost effective.’

She felt that the advent of independent prescribing had empowered physiotherapists in healthcare.

‘If I had a wish list,’ she said, ‘I would train a lot more physiotherapists and make sure we’ve jobs for them. I would put physios running musculoskeletal, chronic cardio-respiratory and long-term conditions services and chronic pain management programmes.

Physiotherapy is essential for minor injury units, she said. It is core in oncology and in palliative care as she highlighted in the 1995 Calman Hine review of cancer services.

Baroness Finlay suggested that greater involvement of physios in dealing with delayed discharges could speed up processes greatly, because physios focus on promoting independence. ‘And that is what our patients need.’

She urged physios to take the profession over bridges in to areas where  it hasn’t been traditionally. She sees AHP clinicians as people who may be able to unlock some closed areas and imaginatively introduce improvements.

‘You are the hope for the future, you can transform healthcare and take it to places that managers, doctors, nurses can’t do on their own. They need you, you’re essential. Go out there and be confident in bringing about changes where they are needed.'