How should physiotherapy courses be funded in future? Frontline looks at what the CSP is doing to engage in the current debate. 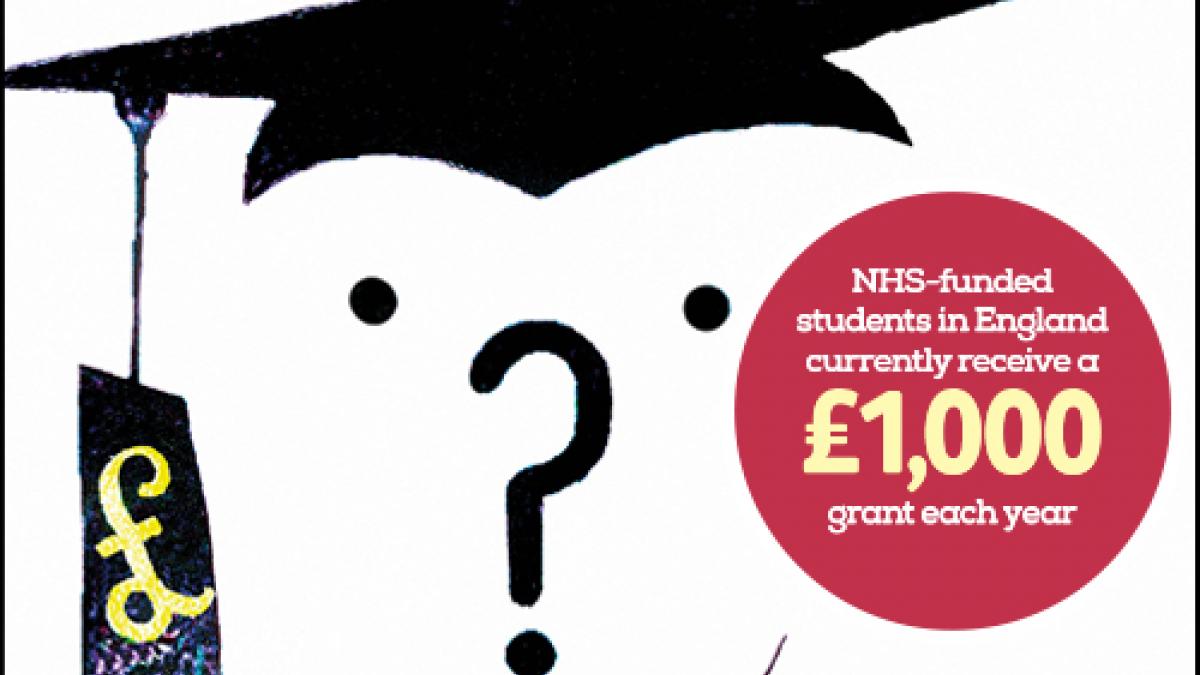 Why is the spotlight on funding pre-registration courses?

Universities believe that the current funding arrangements are not sustainable. They argue that inadequate funding could jeopardise the supply of clinical staff, and increase hardship for students.
It’s also clear that the government is looking for ways to cut back on public spending. Pre-registration education for nurses, midwives and allied health professionals – including physiotherapists – costs more than £1 billion a year in England. It could easily become a target of cuts.

What are the universities suggesting?

Most NHS-funded physiotherapy students in England have access to a bursary to help with their living costs. In England, the NHS offers each student a £1,000 grant each year. The student can then apply for an additional means-tested bursary of up to £4,395 per year. Students in London qualify for up to £5,460.
The tuition costs of their degree are met by the NHS through Health Education England, which pays what is known as the ‘benchmark price’ (BMP) to support each locally-commissioned student place. According to Universities UK, the current combined NHS student and education funding in England amounts to £1.4 billion a year. In contrast, most undergraduate students at university in England who are not on an NHS-commissioned programme (including those who are self-funding on a physiotherapy course) can only access student loans and have to pay their own tuition fees, which are around £9,000 a year. They can currently access a means-tested maintenance grant.
According to the Students Loans Company, in 2014, the average debt of a graduate who had studied in England was £21,000. Once a graduate’s annual earnings hit £21,000 a year – the current repayment threshold – nine per cent of their income is deducted from their salary every month to pay off the debt.
Changing the funding of physiotherapy and other NHS-commissioned courses would bring them in line with funding arrangements for other undergraduates.

Who decides on any changes?

The government. Possible scenarios are that the funding system will be changed, or that cuts could be made to existing NHS funding. Any change is likely to be announced in the Westminster government’s current comprehensive spending review (CSR), due on 25 November.

What is the CSP saying?

The CSP, along with many other organisations, wants to be fully involved in any review. It has made it clear that any system of student and course finance must:  ensure enough physiotherapists are trained to meet demands, be fair and promote equal access ensure the viability of high quality university programmes.

Shouldn’t CSP be campaigning against the change?

CSP’s council will decide on the CSP stance in December, in the light of any announcements made by then and taking account of member feedback.
One option is to oppose change and campaign for better funding from the government. Another is to accept that, if a change is to take place, the CSP needs to have a strong voice in the debate, influencing entry to the profession, the quality of education and ensuring enough physios are trained to meet patient need.
There is also the possibility that, whatever stance the CSP takes, funding for physiotherapy courses could be affected by a decision from government. Unless universities can achieve adequate funding they may feel forced to withdraw courses.
The CSP has already highlighted its concern that the current system is not working well. There are concerns that the BMP is not keeping pace with the actual cost of providing physio courses. Under the current arrangements and levels of funding, which restrict the numbers, so the supply of physios is not keeping pace with workforce demand.
There may be other ways of addressing these problems, other than the option put forward by the Council of Deans and Universities UK. So the CSP believes that providing all the options and risks are explored, a review of the current arrangements would be helpful.
It is important to note, however, that the society has not yet taken a view on which solution is right for the profession.

This is a key concern for the CSP. The society believes that no-one should be deterred from studying to become a physiotherapist for financial reasons.
However, there is evidence in other health professions that the level of bursary is so low that it is causing student hardship. The CSP understands that at one higher education institute nearly two-thirds of applications to its hardship fund recently have been from nursing students.
The evidence on the impact of loans on other courses is mixed. The Independent Commission on Fees reported in 2014 that the introduction of tuition fees does not seem to have impacted negatively on the profile of young people entering higher education in England.  However, the report also states that loans do seem to have had a negative impact on part-time study and on mature students.

What about part-time study?

The CSP is strongly committed to broadening entry to the physiotherapy profession. A concern that we’ve repeatedly raised with education commissioners is the decline over recent years in the number of pre-registration programmes that enable individuals to qualify as a physiotherapist through flexible part-time, or work-based study.
This is because they are no longer being commissioned under current NHS funding arrangements.
The society is keen to see this kind of study route made more available, supported by financial arrangements that enable anyone to enter physiotherapy as a career.

Should current students be worried?

No. The current funding arrangements won’t change while they’re studying for their degree.
Any changes would only affect new students. 2017/18 is understood to be the earliest point that any new arrangements could be introduced.

CSP’s council will oversee the development of the society’s position on student and university funding. It will take into account any announcement in the comprehensive spending review.
It is engaging with all interested member groups, such as students and educators. The CSP’s student executive committee, its equality and diversity group and the education committee will all be debating the issues at their forthcoming meetings.
In the meantime, CSP staff are acting on members’ behalf, including lobbying for proper consultation by the government promoting the principles the CSP believes should underpin any changes, ensuring members are aware of the issue and engaged in the debate  writing to ministers in the Department of Health, Department for Business, Innovation and Skills, and the Treasury seeking assurance that the CSP will be consulted reflecting the importance of safeguarding practice-based learning.

How can members get involved?

The CSP is keen to gain member feedback and perspectives on this issue (see box). This will directly be fed into developing the society’s position. Members can also share their views by responding online to this article (in the Comments section), and via relevant iCSP groups.

So, what are the next steps?

The timeline and immediate next steps on any potential change are currently unclear.  The CSR announcement in November should signal whether or not changes to funding arrangements are proposed, although an announcement could come before then. The CSP will continue to monitor developments in the ways outlined, and to share updates with members before and after this point.

How does this affect Scotland, Wales and Northern Ireland?

Funding for health education is a devolved matter and each country has its own policies on student funding. Any announcement would only relate to England.
However any changes in England could lead to a review in the three other UK nations, who may also be facing financial constraints.
Any one them could, potentially, follow England’s example. The CSP has highlighted the need for any proposals to change funding arrangements to consider the impact on UK physiotherapy as a whole. fl

To respond to the CSP’s consultation email Sally Gosling, CSP assistant director on goslings@csp.org.uk;
To discuss the issues with other members you can comment online to this article, or post a comment on one of the following iCSP groups: Diversity, Newly qualified, Students or Practice educators