Spreading the word: exercise after ileostomy

Physio Gillian Clarke recommends that patients take a softly-softly approach to exercise after having an ileostomy, as Gill Hitchcock and Mark Gould discovered. 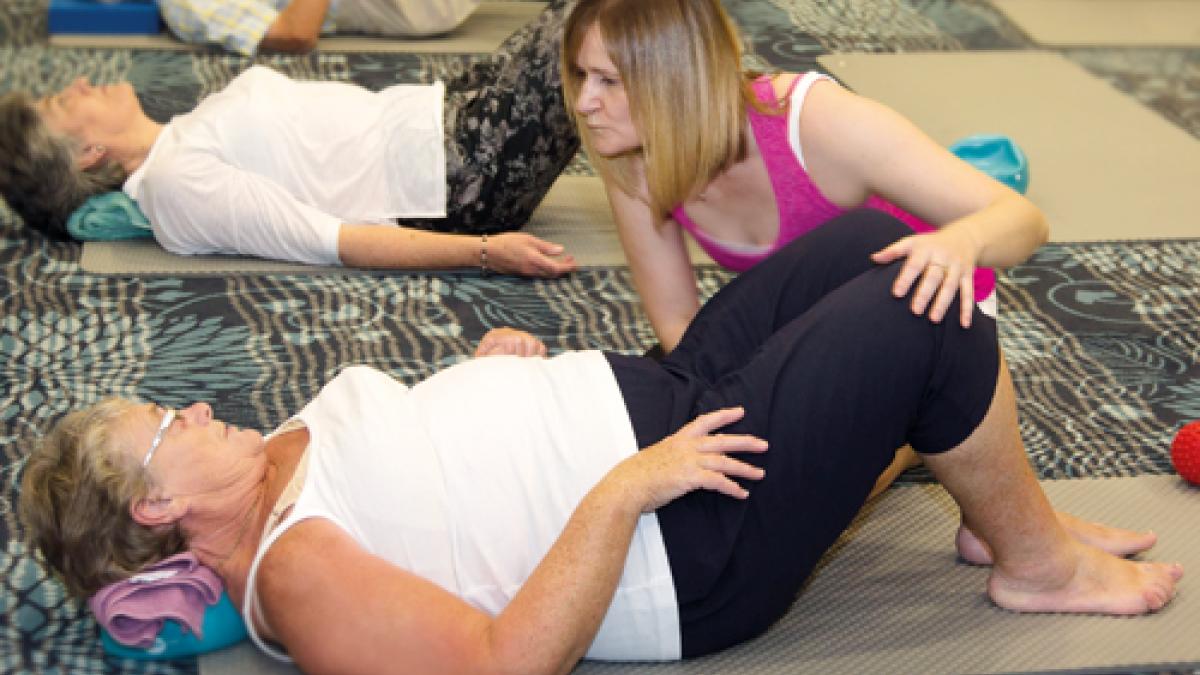 Musculoskeletal physio and Pilates teacher Gillian Clarke has joined forces with a campaigning charity to help spread the word to physios and stoma nurses about the importance of abdominal strength-building for people who have had an ileostomy.

Ms Clarke from Ballymena, County Antrim, says she is aware of a reluctance among health professionals to encourage people to take part in strenuous exercise, for fear of causing hernia or other injury to the stoma site.

Attitudes are changing, however. This is due in part to Ms Clarke’s campaigning work with IA, the ileostomy and internal pouch support group.

It started last year when she spoke to people at an IA meeting, many of whom had a stoma or an internal pouch, about the importance of building gentle forms of exercise such as Pilates, yoga or tai chi into their day.

Ms Clarke’s key message was: listen to your body. If it doesn’t feel right, stop and seek guidance or take a step back because you could be doing too much, too soon.

‘Starting and maintaining something new can be difficult enough and, as many of us know, exercise definitely falls into that category,’ says IA spokesperson Scott Clifford.

‘Gillian’s presentation was very well received on the day and continues to develop IA’s working relationship with qualified healthcare professionals.’

Mr Clifford says that although exercise offers so many positive benefits, the wrong exercise can also have a negative impact on people with a stoma or internal pouch. It can create or increase a hernia risk, for example.

So taking the right advice and guidance in the first place.  about exercise and abdominal support garments, encourages people to remain focused, reduces the risk of problems down the line and, above all, helps them to see a positive outcome.

Ms Clarke says: ‘Stoma nurses, of course, encourage patients to get mobile post-operatively, but there does seem to be a gap. These people felt better after their bowel operations and wanted to lead a normal active life. ‘MSK physios are ideally placed to help stoma patients develop core abdominal wall strength.’

She led a taster Pilates session for people with stoma, organised by IA, last month. ‘The purpose was to let people try and experience a very basic Pilates class, to see if they would like to then go on in their own area with physio-led Pilates.’

And with her support, some of the participants did continue on to other classes. ‘We recommend physio-led Pilates because we have the clinical ability to help people to progress, or regress – if someone comes into the class and the level is not appropriate, I will give a them different exercise. Plus we have the clinical knowledge of what the stoma is and to protect it.’

Ms Clarke became aware of the potential gaps in the system when her mother had to have an emergency ileostomy.

‘I got in touch with the IA because mum was in hospital for six weeks and I wanted to know more about what I could do in terms of exercise and getting her mobile.

‘It seemed that there wasn’t much information about exercise and a feeling that while you want to get patients up and about, the idea of vigorous exercise was less popular for fear of causing a hernia or other injury.

‘But two young women with ileostomy told me they had a new lease of life after they were encouraged to do more exercise so much so that they now compete in triathlons.’

And Ms Clarke’s mother has also seen the benefits of exercise. ‘My mum is 86 and although she has arthritis, she is fine. She is up and about and her exercise is walking around Marks and Spencer.’ fl

Getting good advice about exercise following stoma formation can be difficult, says IA. Given the individual factors that can contribute to the development of a parastomal hernia, one of the main concerns people will have after stoma-forming surgery.

An abdominal hernia is a weakness in the muscle and fat layers of the abdomen that allows the bowel to form a bulge or swelling from inside. In forming a stoma, there is a surgically-created opening through these layers, and the potential for a parastomal hernia to develop. Cases of parastomal hernias are experienced by about 28 per cent of patients with ileostomy and 48 per cent of those with colostomy post-stoma formation.

Factors such as infection, muscle weakness, poor siting and obesity can increase the risk of a hernia. Initially, patients are encouraged to undertake light walking, when they feel able to do so, with active abdominal exercise or lifting heavy weights being discouraged for at least the first three months after surgery.