Gary Henson meets the only military physio on board a ship with a remit to keep the UK’s armed forces healthy as they tackle the Ebola outbreak. 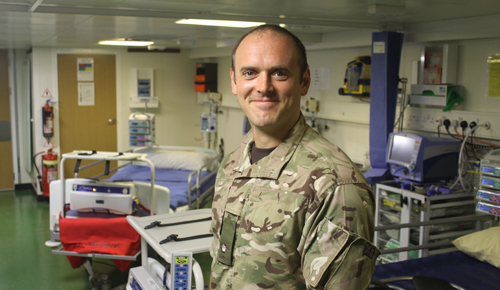 Peter Scott in the intensive treatment unit on board hospital ship Argus. Photo: Surg Cdr Jason Smith
Peter Scott is the only physiotherapist on a casualty ship based off the west coast of Africa and he and the dentist are the busiest of the 80 medical staff. They are looking after 400 UK civilian and military personnel on board the Royal Fleet Auxiliary ship Argus who are tackling Ebola in Sierra Leone.
The team’s remit is to help care for more than 800 British armed forces personnel deployed on land, as well as civil servants from the Department for International Development who head the UK mission tackling the Ebola crisis. They do not provide care to local people affected by the disease.
A vast hospital and support vessel, with a 100-bed medical complex, the Argus instead acts as a forward base for army medics, engineers, soldiers and aid experts. Their job is to build and run medical centres, training local doctors and nurses and transporting vital supplies.
A military physio, Major Scott normally runs the spines rehab team at Headley Court, the Defence Medical Rehabilitation Centre near Leatherhead in Surrey. 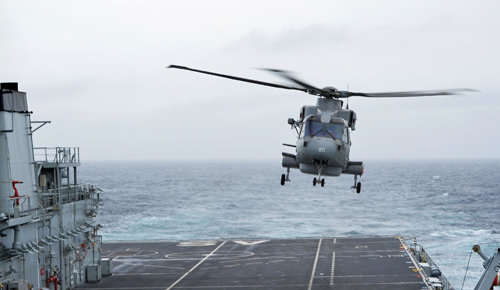 Helicopters from the Argus are used to drop food to the population in quarantined areas. Photo: Royal Navy media team
He explains that Argus was placed on high readiness to respond to a health crisis for a year before this mission.
‘We were given five days’ notice that Argus was being deployed to Sierra Leone,’ said Major Scott. ‘So you pack your bags and off you go.
‘When told we were going to Sierra Leone for six months I wasn’t really sure what a physio’s role would be. But we’re there to look after people who are providing logistics or helping the local infrastructure on how to prevent the spread of Ebola.’
Those in land-based Ebola treatment units are kept very separate.
The Argus sails for half the week up and down the coast and drops anchor near Freetown, Sierra Leone’s capital city, the rest of the time.
‘We are flexible: it depends on what the boss on shore needs for the operation.
‘It is useful to “park” off the coast which gives us a bit of a barrier to Ebola, if you like,’ said Major Scott. ‘We’re put where people can see her, deployed to give reassurance to the locals.’ 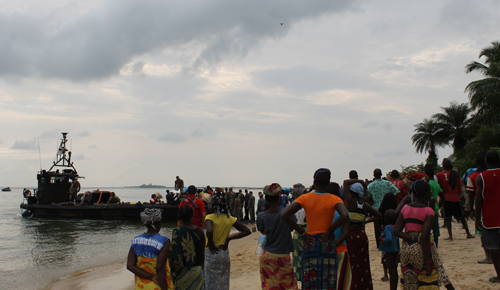 Royal Marine landing craft taking food to the beaches and carried inland with the help of the local population. Photo: Royal Navy media team
A military physio has two main roles, with the primary one being respiratory duties in intensive care. But so far, fortunately, Major Scott has had no patients needing that.
‘To date, I have only had to deal with a few trauma and orthopaedic-related patients admitted to the ward after surgery; such as splinting intervention after post-tendon reconstruction surgery by our burns and plastics consultant. A chef had lacerated his hand.
‘We’ve also had the usual slips, trips and falls. We have used the onboard CT scanner to clear spinal injuries, for example.
‘Our job is to keep them in their job, because it’s very expensive to fly someone home for a simple ankle injury.’
Major Scott’s main work has been running a busy musculoskeletal outpatient clinic on both the ship and ashore. ‘We have had lots of occupational problems, primarily low back pain and lower limb injuries. This is generally related either to their jobs –  the aircrew may be flying for nine hours a day in cramped helicopters, while the Royal Marines may be bounced about on their power boats all day.’
On land he has treated outpatients for malaria and tropical diseases or non-battle injuries. ‘There is a huge array of unfriendly bugs and beasties here,’ said Major Scott. 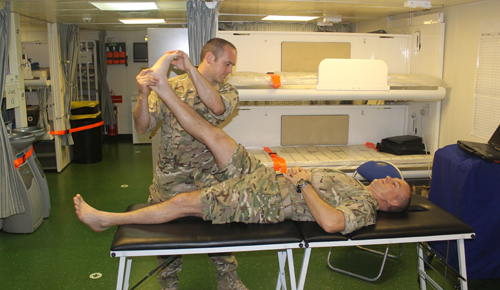 Peter Scott treats a patient on board the Argus. Photo: Surg Cdr Jason Smith
‘Being in the military, the guys train regularly and often pick up sports injuries. Also, as I’ve now found out, having a floor that moves while you’re in the gym can cause extra challenges. It is also a fact that you have a seven-day working week and we’ve been out here a long time, so fatigue does set in.’
Ashore the problems remain much the same. ‘In the end, my job is to try and treat people in theatre [active duty] where possible if it is best to do so. It’s also my job to spot those who need to be sent back because it would be detrimental to them to keep them out here. If we can treat them early and effectively in theatre, we get better outcomes too.
‘Overall, the rehab team have had a really successful trip. Our aircrew has not lost one working day through injury and we have managed to treat and keep every individual we have assessed in theatre, despite some quite significant injuries and the busiest clinic list in theatre.
‘It is not a headline-grabbing, glamorous business, but has been recognised as a really valuable contribution to the mission out here.’
Major Scott said: ‘Ebola is not yet beat but we think we’re getting there. It’s looking very promising.’

Major Scott graduated from the University of Birmingham in 1999. While on NHS rotations he joined the Army Reserve.
Since signing up for the regular army in 2001, he says he has been ‘lucky enough’ to take part in operational tours in Bosnia, Northern Ireland, Iraq and Afghanistan.
‘I’m married to Abby, a very understanding NHS physio, and we have two children.’
Physios can work in the Ministry of Defence (MoD) in uniformed and non-uniformed roles. The army has nearly 100 uniformed physiotherapists while the RAF has a smaller cadre of about 30.
‘As military physios, we are posted to a unit for approximately two to three years; these may be in either secondary care or musculoskeletal roles. There are posts in both selected NHS trusts (known as MoD hospital units) and military bases. These are all over the UK but there are also overseas bases in Germany, Cyprus and elsewhere.
‘We then are selected for operational tours as required,’ said Major Scott.
Civilian MoD staff work in either band 6 or 7 positions. Most hold outpatient posts but specialist centres may require people who specialise in trauma or neurology, for example. These posts are permanent so staff stay in one place unless they choose to apply for MoD posts elsewhere.