Rights and wrongs - pregnancy and discrimination

Physiotherapy staff can face discrimination at work when they become pregnant but the CSP can help, as Robert Millett discovers 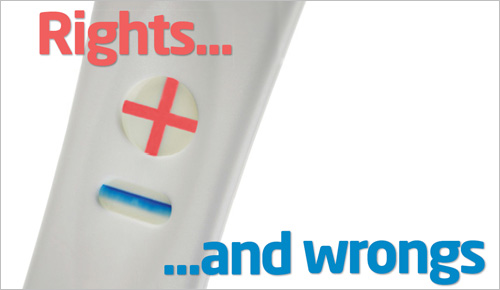 Pregnancy should be a precious time, when a mother-to-be feels safe, supported and secure. But many women face discrimination at work and have to fight just to hold on to their jobs.

Sarah (not her real name), a physiotherapist, had worked for a private health company for more than eight years when she became pregnant.

While still expecting, she decided she would like to return to work on a part-time basis once her baby was born. Sarah presented a plan to her employers, outlining a viable part-time schedule. But she says the proposal was met with a hostile and intimidating response and her employers flatly refused to change her hours.

Sarah contacted the CSP and received support from Jim Fahie, the senior negotiating officer for her region. Together they offered the employer a variety of realistic alternatives, which Mr Fahie says they refused to consider.

Just one compromise was offered: Sarah could return on a part-time basis, but only if she agreed to take a position that was two grades below her current one. This would mean earning £12,000 a year less.

After deducting the future costs of childcare, such as nursery fees, Sarah calculated that her take home salary for a 12-hour shift would be just £50.

Unsurprisingly, she decided not to take up the part-time offer and felt she had no other option but to resign.

She told Frontline: ‘I put my heart and soul into that job for eight years. Even in the last two weeks before I went on maternity leave I was going in at 7.30am and leaving at 9pm to make sure there was a smooth handover. I am angry, upset and, above all, hurt by the way I was treated.’

Mr Fahie says: ‘The employer has now lost the knowledge, skills and experience of an excellent physiotherapist. And now Sarah is looking forward to working with a new employer who appreciates the benefits that a diverse workforce brings.’

Most people would recognise that nurturing a new life requires a healthy body and a risk-free environment.

Research, from institutions including Imperial College London, has also indicated that prenatal stress can be detrimental to foetal development, and potentially have an impact on a child’s long-term health and wellbeing.

Employers are legally required to undertake a health and safety assessment covering pregnant staff, and manage any identified risks. But instead of safeguarding their staff, many employers are falling short in their duty to provide adequate care, and ignoring the rights of pregnant employees.

Jane (not her real name), a physiotherapist, was working for a small private practice while pregnant, but she soon found her workplace environment was becoming unbearable due to extensive building works.

She raised her concerns with her employer, sending several emails about the noise levels, excessive dust and paint and glue fumes. But despite her persistent complaints, her employer failed to carry out any type of risk assessment that involved her, and did not give her an opportunity to raise other concerns.

The employer also neglected to take any action to solve the problems that Jane had identified.

In a desperate attempt to illustrate how bad the conditions were, Jane even resorted to writing the date in the dust on her desk and sending a photo of it to her employer.

Jane asked repeatedly what action her employer planned to take to ensure the work environment was safe.

Things came to a head when it was suggested to Jane that asbestos might be present in the building where the work was taking place. In response to this shocking news her employer told her to ’keep your doors and windows shut’.

During this period Jane experienced two chest infections in quick succession and was eventually signed off sick with stress by her GP.

When her CSP senior negotiating officer got involved this finally prompted her employer to take action and initiate steps that would ensure her, and her baby’s, health and safety in the workplace.

‘I suffered from sleepless nights worrying about the effect the building work could be having on my baby,’ says Jane.

‘Even when I was signed off sick with stress I received phone calls and texts from my manager asking why I was off sick.

I was made to feel paranoid and was scared to point out the difficulties the building work was causing for me. I couldn’t have got through it without the help of my trade union’.

Changes to the law

The CSP led a motion on pregnancy discrimination at the TUC women’s conference in March, which highlighted how the recession and spending cuts are leading to women losing their jobs.

The motion called on affiliated unions to campaign for better maternity rights and lobby against pregnancy discrimination.

It urged the government to remove tribunal fees and to take other measures, such as reinstating the questionnaire procedure in discrimination cases.

Welsh regional steward Louise Wright told delegates at the event: ‘Employers mustn’t be allowed to get away with flouting the law, but recent public criticism of maternity rights is giving bad employers the confidence to do just that.’

Kate Moran, the CSP’s head of employment research, agrees. She says women have been particularly hard hit by the recession and pregnant women are increasingly facing discrimination and cuts to benefits.

‘Most employers wouldn’t dream of being racially discriminatory but many seem to be quite happy to say they don’t want to employ a pregnant woman,’ she says.

‘Cuts and changes to the law are generating an atmosphere that it is okay to discriminate against women and that employers can get away with it.’

Ms Moran points out that a change to the law in July 2013 means that anyone who wishes to pursue a tribunal claim for pregnancy, maternity or other discrimination must pay up to £1,200 in upfront tribunal fees.

‘Since the fees were introduced there has been a real drop in the number of claims getting to employment tribunals,’ says Ms Moran.

‘If you are about to go on maternity leave and you’ve just lost your job where are you going to find £1,200?

And even if you could, would you really risk that money, knowing you may not win?’

Figures show that even when an employment tribunal does lead to a positive result the level of compliance from employers is relatively low. In addition, in many cases, compensation is withheld.

‘Even when they win their cases lots of women never see the money,’ says Ms Moran. fl

Section 18 of the Equalities Act 2010 makes it unlawful for an employer to treat a woman less favourably on the grounds of her pregnancy.

Yet increasing numbers of women are losing their jobs and being subject to discrimination by employers as a result of their pregnancy.

It also estimates that about 60,000 women a year lose their jobs due to pregnancy.

As a result the charity is leading the ‘Alliance against pregnancy discrimination in the workplace’, a joint campaign that includes support from organisations including the CSP, National Childbirth Trust and the TUC.

The CSP is also affiliated to Maternity Action and is supporting calls for the government to: abolish (or at least reduce to a nominal level) the upfront fees for pregnancy discrimination and other employment tribunal claims introduced in July 2013 take urgent and robust action to improve the rate of compliance with employment tribunal awards send a clear and strong message to employers that pregnancy and maternity discrimination is unlawful, and that a harsh economic environment is no excuse to flout the law

If you experience discrimination or safety issues at work, contact your CSP steward or safety rep. To contact the CSP enquiry handling unit, tel: 020 7306 6666

The society is encouraging members who are new mothers to fill in the campaign’s cutbacks calculator to find out how much they have ‘lost’ in maternity and child-related benefits since 2010.

The cutbacks calculator is available on the campaign’s website.