Lynn Eaton goes to Oxfordshire to meet physiotherapists helping to keep older people out of hospital. 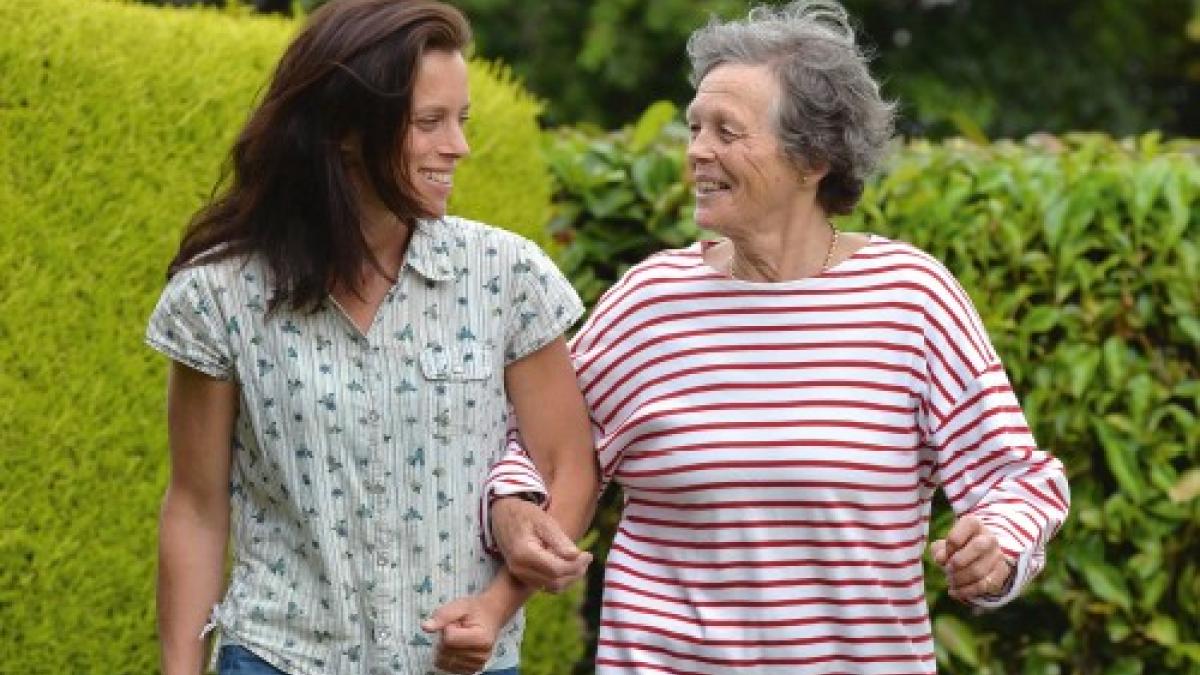 Monicah Brohm (right) and her daughter Dominique Smith pictured above

In an era where people are living longer, many still in their own homes in their 90s, it’s a real challenge to provide the care and support to keep those older or disabled people safe. ‘Care in the community’ – first mooted more than 30 years ago – is finally a reality, albeit with various levels of success. Many older people find themselves visited by a confusing array of services, from carers who help with daily washing through to physiotherapists or occupational therapists (OTs) helping them to manage the stairs after a stroke. Professional boundaries are changing too. Yet, while traditionally physios preferred to stay in a hospital setting, the changes in the community can make it the place for a challenging and rewarding career, as a team in Oxfordshire shows.
Clinical lead and physio Penny McCrabbe has been working at South East Oxfordshire’s Community Team for the last 11 years. In that time, the changes have been phenomenal.
She graduated from the University of Nottingham in 1999, working in Eastbourne and Exeter in hospital settings before moving to the community. She job shares with an OT, working 18.75 hours a week – ideal given she has three children under the age of six. ‘I like working in the community,’ she says. ‘You are covering a whole range of conditions, from orthopaedics coming home after a hip operation, through to end of life.’
And there is far less demarcation between team members than in a hospital setting. While I was there, an emergency call from a patient already known to them was dealt with by a physio, but it could as easily be an OT. Referrals for their services come from a range of places, including relatives, but mainly GPs. There is a single point of access for new patients, who are prioritised from emergency through to routine. Funds, inevitably, are not limitless and, unfortunately, the team has a longer waiting list than they’d like. In June, they had 50 patients who had been waiting since February for assessment. But their April/May referrals included 14 patients classed as an ‘emergency’ who would otherwise have been admitted to hospital. ‘We are working with very complex situations,’ says Ms McCrabbe. ‘People need to know that this is where these complex issues are happening.’
Ms McCrabbe’s team covers a very beautiful rural area, winding northwards from Henley (of regatta fame) to just north of Oxford. It sits between David Cameron’s former constituency in Witney and Theresa May’s in Maidenhead. It’s a well-moneyed part of the country. ‘It’s the sort of area where people will pay for private care and will go into private care sooner, rather than stay in their own homes,’ says Ms McCrabbe.
Her team comprises OTs, a mental health nurse and physios. They happen to be based in Wallingford Community Hospital, but they don’t need to operate from a hospital building – it could as easily be run from a larger GP surgery. They share training, so physios and OTs will know enough about a pressure ulcer to realise when a district nurse needs to be called. (It’s beyond their scope of practice to treat the wound themselves.)
They also work a seven-day service, with a skeleton service at weekends, shared with the other five community teams in Oxfordshire. Over the weekend, there are two clinicians and two support workers for the entire county. The rota works well, the team agrees: the only down side is staff on the shift at weekends take a lieu day in the week, which affects their caseload that day.
In such a large, mainly rural, area there is a lot of driving involved. The team’s members are each buddied up with someone on the end of a phone who can offer support and advice. Technology makes it far easier to share information – providing they are in an area where they can get a mobile phone signal. The team is understandably proud of what it does. Yet they are worried about what is happening to colleagues elsewhere in Oxfordshire – where the clinical commissioning group is planning to ‘sell off’ musculoskeletal services to private providers.
Ms McCrabbe can’t afford to be complacent. She is unhappy with their long waiting list. And in April the service started to use the IWantGreatCare.org satisfaction surveys with its patients. Now widely used in the NHS, it asks whether patients would recommend this service to others and whether they felt happy with the care they received. They are awaiting the results, but so far, she says, feedback has been ‘really positive’.

Gilly Atkins is a band 6 physio with the team, starting there in 2012. She previously worked on a neuro rotation at Hillingdon Hospital, London. Working in the community was a completely different experience.
‘There was quite a bit of pressure in hospital to get people discharged quickly,’ Ms Atkins says, referring to the ‘tick box’ approach to getting someone to walk the stairs in the hospital gym.
‘What I’ve enjoyed in the community is you can work with patients on goals that are meaningful for them, whether that’s wanting to go back to tai chi or walking the dog. Someone can appear quite safe in the hospital but when you get them home, what you think is, their bungalow actually has a step down to the bathroom.
‘Before, I had little to do with equipment outside walking aids. Now it feels like equipment takes a lot of your time away from your traditional physio role. But I’ve found it quite a positive learning experience and there’s always OT support. When you are working at the boundaries of your professional scope it is important to have that support. Now, with appropriate training, she could be ordering a hoist or hospital bed. She has also been trained to recognise the warning signs of a pressure ulcer.
Betty Rodrigues started as a band 5 rotational in 2014, after training at Brunel University. ‘I don’t think anyone on my course would have chosen to work in the community,’ she says. Now a band 6, she is part of the intermediate treatment ward at Wallingford Community Hospital and works with people whose conditions include hip replacements, hernia repairs, broken femur, pneumonia or urinary tract infections. They may not yet be safe enough to return to their own homes or the team is trying to prevent going into an acute hospital.
Ms Rodrigues recalls her first few visits as a band 5: ‘I was quite surprised,’ she says, ‘when we were taught how to fit a raised toilet seat. Previously, I would just have referred to an OT but I was told, “Just do it”, if you see the need. We were being upskilled rather than constantly referring the patient on.
‘I previously had this very strict sense of what my skills are but I felt I was gaining more skills and it would benefit the patient, be more timely – and less costly.’

Monica Brohm, 71, had a stroke in August 2015 while on holiday in Cornwall. It was more than a year before she returned to her home in Henley. ‘I had to learn to walk again. Coming back home and facing everything on my own, anxiety took hold of me. It was terrifying. I was filled with total fear. I went to my doctor and he suggested an anti-depressant, which unfortunately has side effects.’
Mrs Brohm’s daughter felt frustrated that – as a result of having the stroke in Cornwall – her mother might have fallen through the rehab net. She contacted the community therapy team. First they sent an OT, who quickly recognised that Mrs Brohm needed more than just a few aids in the bathroom.
A mental health nurse got involved and he, in turn, helped get her some physiotherapy, as Ms Brohm was worried about her weight loss and loss of muscle strength. Then two physios helped Mrs Brohm, one taking her out for walks: ‘Those visits were precious to me. In hospital the nurses are so, so busy. Once I got home, I had to rehab all over again. Now I feel there’s been a huge improvement.’
Mrs Brohm had even gone into town on the bus. ‘If you do it once you can do it again!’ She is no longer on the team’s books – but if there’s any reason for her to contact them, they are there. ‘They haven’t just left me.’
Barbara Small, also 71, cared for her husband, who has multiple systems atrophy, a relatively rare brain condition very similar to Parkinson’s. So when Ms Small had her stroke, his family felt they had no option but to place their father in a nursing home. Now Barbara lives there too, following three months in hospital in Abingdon, where she had intense physio. Their former home is in the same village as the nursing home.
‘Home is so near and yet so far,’ she says, ‘but at least friends can come in, so I’m very lucky.’ She can’t use her left arm ‘and I can’t do anything with my right hand without support from my left. I can’t walk at all, even with a frame, as I can’t hold a frame. It’s like being a baby all over again.’
Her goal is to get into a car – something she can’t manage at the moment.
It was three months after leaving hospital before Gilly Atkins, a physio from the community team, was able to start. Barbara paid for a private physio, through Headway, the brain injury charity, during that time. ‘It was a huge relief to get Gilly along once a week, starting very gentle exercises. It’s been wonderful.’ Ms Small has also had input from an OT and a mental health nurse. ‘I feel I’m beginning to get to my goals. I’m going to beat this bloody stroke!’ fl