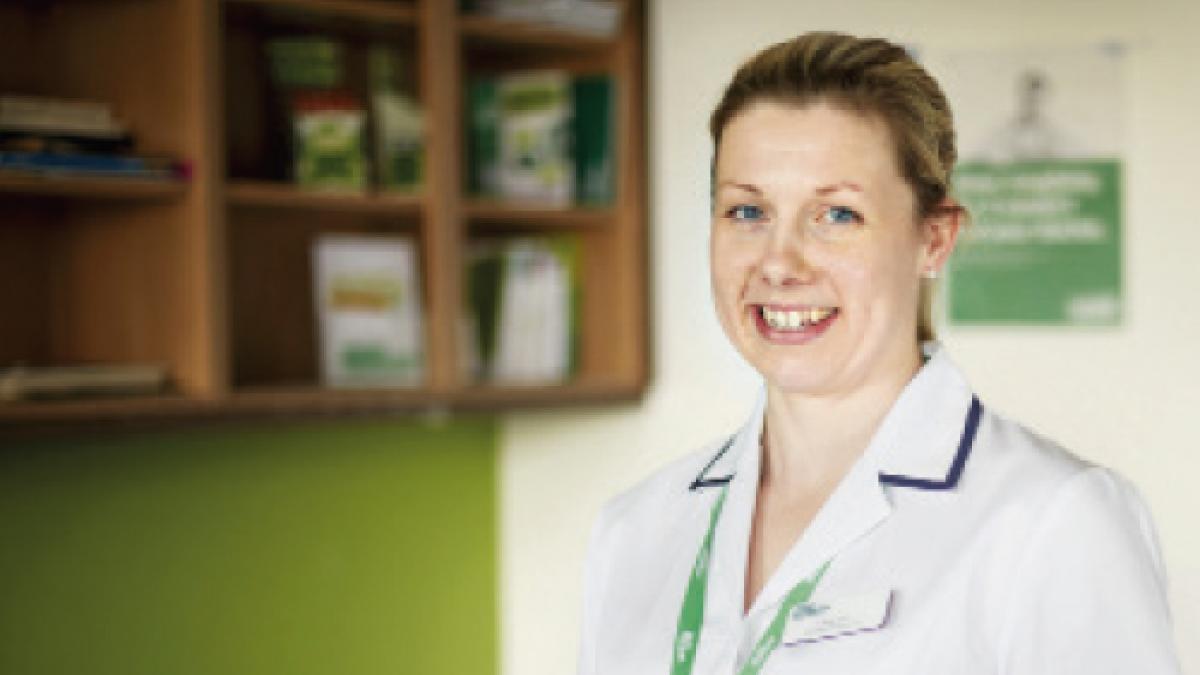 Clare Lait (pictured above) is to become the face of physiotherapy in cancer care in a nationwide Macmillan Cancer Support advertising campaign to be launched on TV, billboards and posters in August.

A Macmillan specialist community physiotherapist for Gloucestershire Care Services NHS Trust, Ms Lait features in the revamped ‘Nobody should face cancer alone’ campaign. This demonstrates how physiotherapists can support patients from diagnosis to living beyond treatment and in palliative care.

Ms Lait said previous campaigns focused on the role of nurses, while this version will showcase what allied health professionals can do.

‘I tell the story of how physiotherapists work alongside nurses. It shows how physios can help people progress from struggling physically after initial diagnosis to running a marathon, or playing with their grandchildren,’ she says.

Filming and taking part in the photoshoots was ‘really enjoyable’, she says.  ‘We had amazing actors and it was almost like I was in my normal physiotherapy role – except when I had to say a line, which was a bit tricky’, she adds.

Ms Lait is a former committee member of the Association of Chartered Physiotherapists in Oncology and Cancer Care (ACPOCC) CSP professional network. And she is a prominent member of the specialist cancer physiotherapy community, having contributed to national guidelines on cancer care, including Macmillan Cancer Support’s physical activity guidelines.

She is also ‘very vocal and passionate’ about raising the profile of physiotherapists in cancer care, she says.

‘This campaign highlights to the nation that there’s a lot that physiotherapists can do.’ Some patients – and even some medical professionals – lack awareness about the potency of physiotherapy interventions in the cancer field, she points out.

‘Many medics don’t know that physiotherapists can relieve pain and symptoms of cancer or even that they can help right up until the end of life, so we need to promote that more widely’.

Taking part in the Macmillan campaign sits well with Ms Lait’s professional mission to improve access to physiotherapy for patients with cancer.

‘There is a focus on accessing specialist cancer physiotherapists, but there are not enough of us to meet demand. As the number of patients increases, we need to look to the wider physiotherapy workforce to upskill people in cancer care,’ she says.

Ms Lait, who also works part-time in the independent sector, is developing a database of physiotherapists who see cancer patients, but are not cancer specialists, which is being collated on her website.

Ms Lait is also currently undertaking a master’s degree in clinical leadership in cancer palliative care and end of life. And she has also been involved in the Prosper clinical trial at Warwick Medical School, which forms the Faculty of Medicine at the University of Warwick.

Researchers are testing how early physiotherapy intervention can prevent long-term shoulder problems in patients who have had breast cancer.

Find out more about the database mentioned in this article.

A physio is leading allied health professional (AHP) education in a pilot looking at the effectiveness of training community teams in end of life and palliative care.

Clinical educator for AHPs Lesley Sayliss is one of four trainers on a two-year palliative/end of life care education project. Funded by the charity Macmillan Cancer Support, the project began at Hertfordshire Community NHS Trust in March.

‘The purpose is to increase the confidence and skills of community staff to support people at end of life and enhance patient experience of palliative care,’ she said.

The project prioritises training for integrated community teams, community hospitals and specialist neuro, cardiac, respiratory and diabetes community teams. ‘The community focus makes us a new model and we will be independently evaluated at the end of the pilot to look at the impact on staff education and patient end of life care choices.’