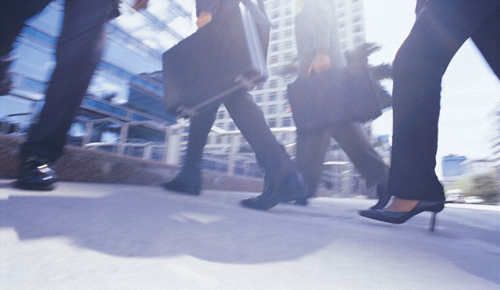 Could you step up your workout at work?

Most people don’t get enough physical activity in their workplace to reduce their risk of cardiovascular disease, say researchers.
A study of hospital staff in Ireland found that, though two-thirds of them knew about national guidelines on physical activity, very few achieved those targets.
Eleanor McIntyre of Galway University Hospital and colleagues persuaded 83 staff members to wear pedometers for a week. They measured how many steps each employee took, at work and in their own time: 10,000 a day is considered healthy.
About 45 per cent of the employees took 6,000 steps a day at work. But even if they did the recommended half hour of physical activity outside working hours, that was not enough to make up 10,000 steps a day.
‘Increasing demands on personal time can limit the amount of physical activity achieved outside of working hours,’ said Dr McIntyre.
The study, presented to the European Society of Cardiology’s EuroPR event congress in Lisbon earlier this year, noted that 30 per cent of the employees were ‘sedentary’, taking fewer than 5,000 steps a day at work.
‘Promoting the concept that short bouts of physical activity can be accrued during working hours rather than considered solely a leisure time activity seems a realistic approach,’ said Dr McIntyre. McIntyre E et al. Exploring the physical activity levels and sedentary behaviour  of employees within a workplace environment. Presented at EuroPRevent 2015, Lisbon. 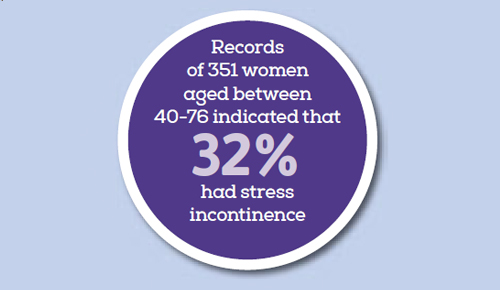 Continence problems are often overlooked in older people (see also page 24). Yet simple treatments have proved useful and cost-effective.
‘In spite of treatment availability, multiple sources suggest that incontinent older women do not receive any treatment, and when they do, it is often after years of suffering,’ say the authors of a new study, which can be read in full online.
Pelvic-floor exercises often help control stress incontinence, when a sharp movement such as a sneeze causes a urine leak. But they may not be enough when the problem is urge incontinence: a sudden and often unstoppable need to urinate immediately.
Victoria Phillips, of Emory University in Atlanta, and colleagues pored through published studies to compare three different pathways for urge incontinence in older women.
Limited behavioural therapy included pelvic floor muscle training, education on urge control strategies, and self-monitoring with bladder diaries. Full behavioural therapy used the same techniques along with biofeedback for muscle training. The third pathway was use of incontinence medicines.
‘Behavioural therapies are options for patients who are cognitively capable of learning new skills and are willing to commit to exercising their pelvic floor muscles on a daily basis,’ the researchers note. ‘Drugs reach their maximum effectiveness more quickly, but are often discontinued due to side-effects and drug costs.’
They found that each pathway was effective, with full behavioural therapy proving the most helpful and cost-effective. The drug pathway was the most expensive. Treatments worked best when patients had some choice of therapies and the chance to swap along the way.
‘Behavioural and/or drug treatment for urge incontinence can improve quality of life for community-dwelling, elderly women at very reasonable costs,’ the authors conclude.
‘The data should encourage clinicians to screen for this condition, often not reported, and develop treatment plans compatible with current guidelines and patient preferences.’  Phillips VL et al. Treating urge incontinence in older women: a cost-effective investment in quality-adjusted life-years (QALY), Journal of Geriatrics 2015.
Poor sleep, excess fat or slow reactions may be clues to unreported lower urinary tract problems in women, say researchers.
They analysed the records of 351 women aged 40 to 76 years attending a menopause clinic. Ten per cent reported nocturia, having to get up at night to pass urine; 45 per cent needed to urinate frequently; 11 per cent had urge incontinence; and 32 per cent had stress incontinence.
Non-restorative sleep was linked with frequency and nocturia; abdominal fat with nocturia and stress incontinence; and delayed reaction time with urge incontinence.Terauchi M et al. Menopause 2015.

Researchers at Glasgow Caledonian University are sifting the evidence on women’s urinary incontinence, to provide physios with guidelines for best practice.
Doreen McClurg and colleagues are conducting a Cochrane overview: summarising the results of numerous systematic reviews covering different interventions.
‘Current clinical practice often does not reflect the available increasing evidence base,’ says Dr McClurg, noting that people simply don’t have enough time to read and compare all the available evidence.
‘Patients often have complex conditions and identifying the most effective rehabilitation intervention is not always easy,’ says Dr McClurg.
The team, funded by the Physiotherapy Research Foundation, aims to create an accessible document combining all high-quality evidence on the subject.  It will highlight the limitations of current best evidence and allow comparisons of the effects of different interventions.
Could pelvic-floor exercises be tweaked to work better? National Institute for Health and Care Excellence guidelines call for women with stress urinary incontinence to be offered at least three months’ exercise treatment.  Some may be offered use of an electromyography biofeedback device to help them carry out the exercises correctly. The OPAL trial aims to find out if the biofeedback makes the exercises any more effective.
The trial, funded by the National Institute for Health Research, is currently recruiting women over 18 with stress (or mixed stress and urge) incontinence to attend six appointments during a 16-week period.