Man on a mission: James Benson and stroke-specific care 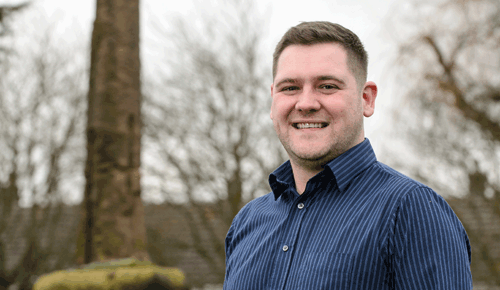 Award-winning physiotherapist and full-time Stroke Association trainer James Benson
By publicising the early signs of stroke the Act FAST campaign has helped to save an estimated 4,000 people from long-term disabilities, according to Public Health England (PHE). Campaign adverts highlighted the fact that speech problems and weakness in the face and arms can indicate a stroke – and should prompt an immediate call to the emergency services.
But despite the campaign’s success PHE says 10,000 more strokes could be prevented each year if mini-strokes were spotted and treated in time.
Award-winning physiotherapist and full-time Stroke Association trainer James Benson agrees. He is on a mission to raise awareness about the signs of stroke and up-skill people who care for stroke survivors.
Mr Benson explains that in 2011 the Care Quality Commission published Supporting life after stroke, a report that raised concerns about how well care-home staff understand stroke.
Since then the Stroke Association has been working in partnership with UK charity Skills for Care in order to address the issue. They have developed the first formal stroke qualifications for carers, which allow staff from both community and residential care settings to specialise in stroke-specific care.
Mr Benson was one of the project leads and the overall lead for the training content and assessment materials. He says traditionally there had been a focus on mandatory training for carers, which has meant that non-mandatory training has tended to be neglected. As a result many carers have received inadequate or insufficient training in the area of stroke care.
‘People tend to think they understand stroke, but often they haven’t had any training,’ he says.
‘They don’t realise that stroke is the largest cause of adult disability in the UK, and they don’t realise the scale or complexity of it. They are really caring people and they want to do the best they can, but they need the right skills to be able to do that.’
Mr Benson says there is still a huge lack of public awareness about stroke, and that the courses aim to re-educate carers, combat misleading myths and provide them with up-to-date, evidence-based information.
‘We often get people coming on the courses who think that a stroke happens in the heart, or that you should call your GP if someone is showing signs of a stroke,’ says Mr Benson.
‘And people frequently tell stroke survivors information that can be damaging such as “people don’t get any better after six months or two years” – which we know is simply not true. Recovery can go on for years after a stroke and we need stroke survivors to keep working on their recovery and maximise their potential.’
To address these problems Mr Benson and his colleagues introduced some pioneering changes to carer education. They have developed two training programmes, which Mr Benson now teaches. These are the Qualifications and Credit Framework (QCF) level 2 stroke awareness and acquired brain injury course and the QCF level 3 stroke care management qualification.
The development of the courses began when the team was awarded an innovation fund from Skills for Care. They received an initial grant of £140,000 to develop and roll out the training. And they later received an extra grant of £40,000 to develop an e-learning option for some of the course units.
Initially the team targeted the courses only at carers and care home employers in Salford, Trafford and other areas in north west England.
‘We had a strategy to engage people who hadn’t had any of our training before,’ says Mr Benson.
‘So we approached carers’ employers and asked if they would be interested, and the places were snapped up fairly quickly.’
They have now extended their reach and the courses are available across the UK.

The courses aim to ensure that carers have a good understanding of stroke. This includes learning about the principles of neuroplasticity, neuroanatomy and how to communicate effectively with stroke survivors.
The level 2 course provides an introduction to stroke and acquired brain injury. It runs over two full days, includes a workplace assessment and has two units that are also available via e-learning.
The level 3 training is specifically designed for people who work with stroke survivors or those who might be at risk of stroke in care settings, whether they work in a residential, community or healthcare environment.
It consists of eight days of face-to-face teaching and additional guided distance learning via workbooks. It also involves workplace assessments, which Mr Benson says help students to transfer what they learn in the classroom to their everyday work.
All the course content is based on the Stroke Specific Education Framework guidelines for training and is endorsed by the UK Stroke Forum Education and Training.
‘We try to make the training as engaging as possible and to give the most up-to-date, quality information,’ says Mr Benson. ‘There is a lot of engagement and activity, and we to try to help the students gain experience from a stroke survivor’s perspective.’
Students are asked to complete tasks that encourage empathy building and develop understanding.
‘So for example we give everyone a “disabled break” – where they mimic a disability that they might have if they had a stroke, and then they have to go and make themselves a cup of tea or use the toilet,’ says Mr Benson.
‘This highlights to them just how hard it is living with a disability. And we then ask them how they feel, and how would they feel if they had to live like that from now on.’
The course also explores the way carers talk to stroke survivors and invites them to consider the language they use to encourage and motivate patients.
‘For instance, if I said to you “You have got six months to get better and then that’s as good as you’re going to get” how would that impact on you?,’ asks Mr Benson.
‘And if I instead said to you “If you keep working really hard there’s a potential for that disability to get better” how would that impact on you differently?’
One of the ideas carers are introduced to is the communication passport, a tool that Mr Benson has adapted from the field of learning disabilities and ingeniously applied to stroke care.
‘A communication passport is a book that the students create, which is unique to a stroke survivor who has communication problems,’ he explains.
‘It details information about them – such as what they like, what communication issues they have and what sort of communication skills can be used to most effectively communicate with them.’
The passports provide carers with opportunities to share useful insights about a stroke survivor with other carers and the person’s family and friends.
Mr Benson says each course has a maximum of 20 participants. This helps to ensure they enjoy the best possible learning experience, and the e-learning modules make it easier for some individuals to participate.
‘It’s difficult for employers to release a lot of carers to attend all at once, which is why we launched the e-learning course,’ he says.
‘But we have also found individual carers are paying to go on the e-learning course by themselves, just because they have an interest in stroke.’

Feedback from the course has been overwhelmingly positive, with students reporting that it has increased their confidence and capacity to deal with stroke survivors at work.
In addition the project received acclaim from the national awarding organisation National Qualifications and Credit Framework, as well as receiving the CSP’s award in recognition of his work in integrating health and social care.
He says he and his colleagues are simply motivated by a desire to drive up standards in stroke by providing good quality education and training.
‘Ultimately, by up-skilling care staff to support stroke survivors and their complex needs we are increasing their quality of life, preventing further complications from occurring and giving the staff the skills to recognise when they need to make an onward referral to a specialist, such as a physiotherapist,’ he explains. As a result, the course helps to turn stroke care into a career, by giving carers the knowledge they need to provide high-quality care.

Both qualifications offered on the courses qualify attract funding from Workforce Development Fund.
Companies in England that are registered on the National Minimum Data Set for social care can claim back the cost of the level 2 and 3 courses. For more information, visit the Skills for Care website.