Making the commitment - Jill Barker and the industrial relations committee 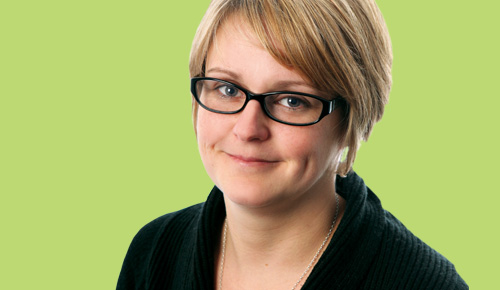 Jill Barker first got involved with industrial relations when she became a steward in 2001.

Since then she has taken on greater responsibility and in February this year she was elected chair of the CSP’s industrial relations committee (IRC).

Growing up in Newcastle upon Tyne, where she still lives today, she always knew she wanted to be a physiotherapist.

‘When I was younger my grandma had a really nasty fall and had physio,’ says Mrs Barker.

‘And both my parents have been in motorbike crashes and needed quite a lot of physio as well.

I saw all the rehabilitation and watched them being rehabbed back to health – so it seemed like a natural progression for me.’

After studying physiotherapy at Teesside University from 1997 to 2000 she went on to work at the Freeman Hospital, part of Newcastle upon Tyne Hospitals NHS Foundation Trust.

Not long afterwards an opportunity presented itself and she volunteered for her first steward’s role.

‘Our workplace steward was leaving, just as Agenda to Change was beginning to be talked about,’ says Mrs Barker.

‘I knew it was going to lead to huge changes to terms and conditions in the NHS, and I’ve always being interested in good employment practice, so I was happy to take over the role.’

Despite being a junior on rotation, Mrs Barker enthusiastically embraced the steward’s role and sought additional training, which allowed her to become regional steward for the north east.

She now works full-time as a senior physiotherapist, specialising in hands, burns and reconstructive surgery but is still dedicated to her steward’s role. In addition, for the last five years, she has managed to combine it with being an NHS elected representative to CSP Council.

Combining these voluntary commitments, along with her work and personal life, means there’s a lot to juggle but Mrs Barker says she’s lucky to have an understanding husband and a very supportive team and employer behind her.

She also cites her father, who was a strong trade union representative at his workplace, as an enduring influence and inspiration.

The IRC brings together CSP representatives from England, Wales, Scotland and Northern Ireland.

The committee is responsible for making decisions on the employment and trade union work of the society, as well as overseeing the work of CSP staff and local representatives.

Having already acted as a steward, Council member and the committee’s previous vice-chair, Mrs Barker is used to multi-tasking and says her wide-ranging experience should hold her in good stead as chair.

‘I’m very passionate about all my roles, including my clinical one,’ she says.

‘But it’s very important to me that I make the time to be there for the members I represent, so I give as much as I’ve got to give. And by having a wider understanding and seeing the national picture I feel I can represent them better.’

As chair Mrs Barker says one of her priorities is to raise awareness of the link between good employment practice and patient care.

She is convinced that good quality employment conditions lead to a more efficient, more effective workforce and this, in turn, produces better care for patients.

‘Regardless of where you work, or whether you are an assistant or the highest qualified physiotherapist, good quality employment helps promote wellbeing and is essential for patient care.

‘It’s an entitlement that all employees should enjoy and it translates into quality care for patients. Both are of equal importance and go hand-in-hand.’

Mrs Barker describes her predecessor, Alex MacKenzie, as an incredibly hardworking chair who will be ‘a tough act to follow’.

‘Her dedication in leading the IRC through a very challenging period was an inspiration and I’m very pleased that she is continuing on as my vice chair, in terms of the support she will offer.’

Mrs Barker is also keen to acknowledge the dedication and ‘amazing support’ the IRC receives from CSP’s employment relations and union services staff and officers.

‘Without their hard work, which is often behind the scenes, and their campaigning for quality employment in all areas, the IRC would not be the success it is.’

Mrs Barker is keen to mobilise the society’s membership and to encourage individuals to take positive action.

She says members are currently dealing with an extremely challenging environment, and mentions changes to NHS employment terms and conditions, the government’s austerity measures and the threat of service fragmentation due to competition in England.

As well leading the committee in supporting members faced with staff cuts and downbanding, she says she will be involved with difficult national negotiations and will be calling on members to offer their support to future campaigns.

Mrs Barker was instrumental in the IRC’s organisation of mass industrial action in 2011, when thousands of CSP members working in the NHS joined a strike day in support of their pensions.

She describes that event as a ‘show of strength’ and says it should serve as a powerful and inspiring reminder to members, whether they work in the NHS or in other types of employment.

‘Industrial relation issues are fundamental to the democracy of the CSP,’ says Mrs Barker.

‘And in this time of austerity we need to show there is an alternative and that physiotherapy is perfectly placed to save money and promote good working practice – by keeping people in work and helping people back to work.’

Despite the challenges ahead, Mrs Barker is keen to emphasise that there are still ‘excellent opportunities’ for the physiotherapy profession and members as a whole to move forward and succeed.

She also hopes to encourage members to become more actively engaged with industrial relations, and she thinks physios are particularly well-suited to such tasks.

‘Physiotherapists are naturally inquisitive and naturally want to make things better, so we are very well equipped to look at issues with a problem-solving approach – because that’s what we do every day.’ fl

Lesley Mercer, director of the CSP’s employment relations and union services, welcomes Mrs Barker’s appointment and says her previous experience will help the IRC to tackle the challenges ahead.

These include issues on pay, pensions, terms and conditions of employment and employment rights.

‘Government legislation is making it harder for organisations like the CSP to lobby and campaign in defence of members pay and public services,’ says Ms Mercer.

‘But it’s not all doom and gloom. We know that effective local partnership working and campaigning does produce results.

‘We have a major trade union demonstration on the coalition’s approach to austerity coming up in October.

And the campaign for practical alternatives to austerity, such as the introduction of the Robin Hood Tax, is going from strength to strength and the IRC is right at the centre of all of this.’

Ms Mercer also paid tribute to all the members of the committee who give up their own time, to attend meetings and support CSP members with their workplace issues.