Get ready for Workout at Work Day 2014

The CSP is urging members to register now and start planning for 6 June: Robert Millett reports 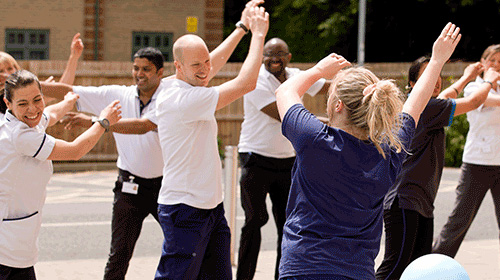 Last summer hundreds of  successful, health promoting events were held to mark CSP’s ‘Work out at Work Day’ (W@WD), and with your help this year’s campaign could be even better.

A record number of members turned out in 2013, hosting simultaneous events at sites across all four nations and generating widespread publicity.

Calculations from the CSP press office reveal that media coverage of W@WD reached an audience of over 68 million people, with more than 180 news items featuring coverage of various events.

The campaign was reported on ITV, ITV Wales, BBC radio and more than 35 local radio stations.

Articles also appeared in The Daily Telegraph, Daily Express and numerous local newspapers, as well as on websites such as AOL.

More than 860 physiotherapy staff and more than 120 NHS trusts, boards and hospitals were involved, along with many independent hospitals, such as Nuffield Health and BMI Health.

Members engaged directly with the general public, NHS staff, and employees from well known companies such as John Lewis, Sainsbury’s and EDF Energy.

Politicians got involved with the campaign. In Northern Ireland Jim Wells, vice chair of the Assembly health committee, met with a physiotherapist to perform some simple desk-based exercises.

And in Wales CSP staff were joined by Assembly Members Ken Skates, Lesley Griffiths and Mark Drakeford for a walk from the Senedd to Cardiff Bay Barrage.

Now, in its fourth year, the society is hoping members will help to build on last year’s success by getting involved with W@WD 2014.

As with previous years one of the goals of the campaign is to encourage employees to take breaks and become more active, both during the working day and outside of work.

It’s also chance for every member to help raise awareness of the important role that physiotherapy plays in both the prevention and treatment of work related ill-health.

‘All CSP members know physiotherapy produces good health outcomes and is cost effective, but people making decisions about health in your area may not.

W@WD is a great opportunity to make links with the people making important decisions about health services in your area.’

In 2013 Richard Morford, head of a private physio practice in Norwich, organised a W@WD event at Group Lotus, in Norfolk.

He invited Olympic boxer Anthony Ogogo to visit the company and encourage staff to run, walk and roller-blade around the company’s race track.

The event was a huge success at the time, but it has also had a lasting effect.

‘Since our event last year there has been a reduction in time off work and an improved emphasis on self-management reinforced by the occupational health team at Group Lotus,’ said Mr Morford.

‘A monthly session has continued, allowing employees to walk, run or cycle round the race track. This has stopped over the winter but it will start again in March once the weather improves.’

Mr Morford is currently consulting with Lotus about staging a similar event this year. He has also been approached by the John Innes Centre, a large research facility in Norwich, to run an event that he says would help ‘improve the health and well being of hundreds of scientists and researchers’ who work at the site.

After last year’s event the society conducted a survey to evaluate how successful W@WD had been in raising the profile of physiotherapy and encouraging healthier habits.

The resulting feedback revealed that 89 per cent of members thought participants had enjoyed W@WD ‘extremely or very much’.

In addition, 91 per cent of members felt that the events had raised the profile of physiotherapy; with feedback comments describing it as ‘a great initiative for the profession’ and reporting that it had ‘inspired staff about workplace exercise opportunities’.

An overwhelming majority of participants in W@WD events said it had increased their knowledge of and understanding of the importance of exercise (89 per cent). And more than half of those surveyed said they were ‘very or extremely likely’ to build more activity into their daily lives as a result.

The event also proved to be a valuable way of raising awareness of the profession, with 90 per cent of participants reporting that they found W@WD ‘extremely or very useful’ for gaining an understanding of what physiotherapists do.

Amanda Jones, occupational health physiotherapy manager for Lothian occupational health and safety services, told Frontline: ‘The results were really positive and we will be doing the same again this year. But this time we will also be targeting specific groups, which are more prone to being sedentary – such as our telecoms department, where people tend to be sitting all day long.’

Physios will be encouraging NHS Lothian staff to engage in 10- minute workstation workouts, which combine health education with stretching and toning exercises and the option of a rapid fitness test.

‘We put a chair up against the wall and we time them while they sit and stand as fast as they can 10 times. Then we compare it with normative values for men and women of different ages. It’s good fun, takes seconds to do and acts as a bit of a wake-up call for some people.’

In 2013 physiotherapy staff at Cardiff and Vale University Health Board staged a series of successful W@WD events.

This year they plan to encourage staff to exercise in their work environment, minimising disruption to their working day, and to demonstrate how they can incorporate postural management and modified exercises into their daily routines.

‘We will also be leading desk-based workouts and teaching staff how to use micro-pauses, as well as regular breaks away from the computer,’ said Gill Pratt, a senior occupational health physiotherapist at the health board.

‘This could mean changing small things, like taking the stairs, parking 5 minutes further away and using everyday activities to increase the frequency and intensity of their daily physical activity.’

The application form can be completed now and updated at a later stage with details about the event you intend to organise.

Once registered members will receive a newly updated resource pack and, prior to holding their event, a set of the CSP’s public information leaflets (Fit for Work, Fit for Active Work, Easy Exercise Guide), the Fitness Profits booklet and also a t-shirt.