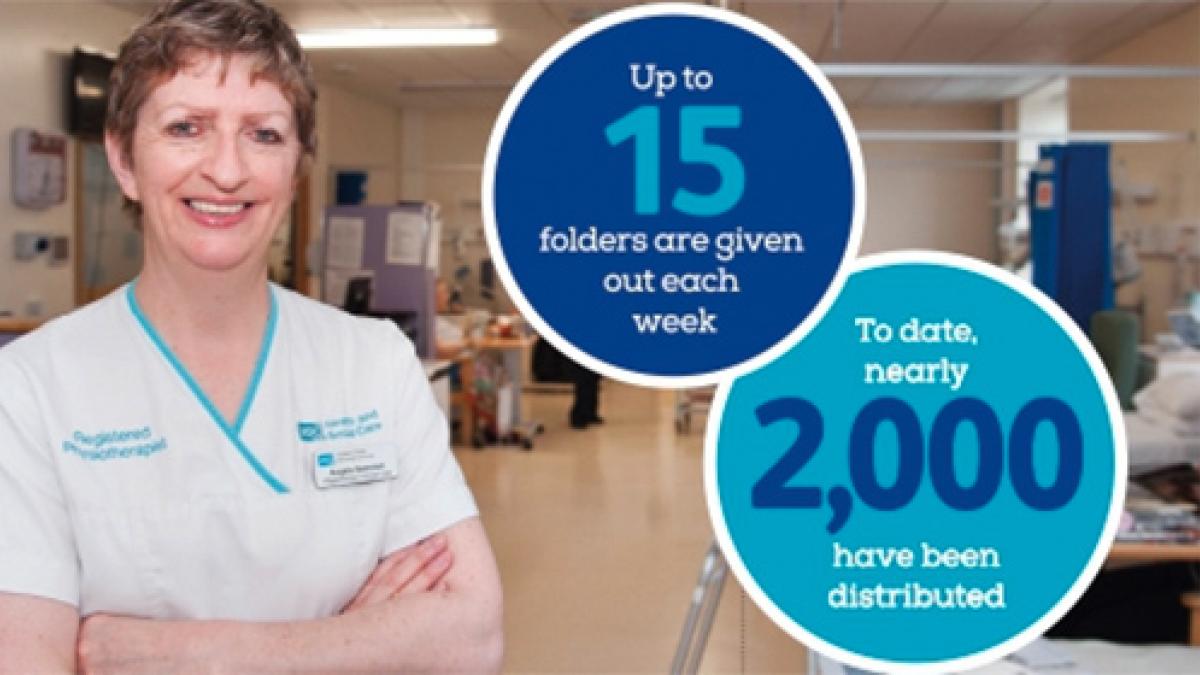 Patients at Northern Ireland’s Lurgan Hospital are benefiting from a recent initiative which gives each one a patient rehabilitation and care folder.
Developing the folder won Angela Gemmell, physiotherapy lead for Northern Ireland’s Southern Health and Social Care Trust, the CSP Excellence Award for demonstrating patient and/or public involvement.
Introduced just under two years ago, the folder was designed to improve communication across the hospital’s multidisciplinary teams, patients and their families.
The idea was born from Mrs Gemmell’s frustration at patients being given numerous notes, exercise plans and other personal care information in a haphazard format which meant the information was often ignored or lost.
‘We were giving out information and then a physiotherapist would ask the patient “How are you getting on with your exercises?” and they would ask “What exercises?”,’ says Mrs Gemmell.
‘I identified the fact that a lot of written information was being given out to patients but it wasn’t really accessible to them,’ she adds.
The folder was designed to help develop care planning and goal setting with patients. It is also used as a tool to enhance the information already available to the multidisciplinary team.

It is given as a gift from the hospital to the patient on admission to try to ensure all aspects of patient care  – as well as the needs of carers and families – are being met. Up to 15 folders are given out to patients each week and nearly 2,000 have been distributed to date.
‘Especially for patients over 65 who frequently come in and out of hospital, I would like to see it as something they are given automatically and take with them everywhere,’ says Mrs Gemmell.
In planning and designing the folder, Mrs Gemmell carried out a literature review of patient and user engagement, to identify how to communicate more effectively with patients, carers and families.
As a result of both the review and engagement with the trust’s information forum, she built up an evidence base and concluded that sharing information in a written format would be most effective. This became the rationale for developing the folder.
After a review of learning styles, it was decided that the design and layout of the folder would include a mix of diagrams, written information and a diary-type format to record conversations and questions.
The folder is divided into sections including for nursing, occupational therapy and physiotherapy and is laminated to reduce the risk of spreading infection. It makes good use of colour and is all written in plain English, quality assured by the trust’s public engagement framework.
Patients and their families helped to design the folder to try to ensure that their needs are covered, that prevention and advice is included and that there is clarity around the roles of the multidisciplinary team dealing with the patient.
Mrs Gemmell, who worked closely with trust user involvement leads, believes that user involvement has been key to the success of the project.
‘Patients and families were keen to work through ideas for communicating and sharing information with and between the medical and professional staff,’ she explains.

The folder was initially tried out by a small group of patients and their families to assess its value, layout and usefulness to them and to staff in detailing the clinical and personal picture of the patient.
‘We make sure core information is put into the folder along with tips and information,’ Mrs Gemmell says. This includes explaining the roles of the physiotherapist, occupational therapist and social worker, along with contact numbers and times they are available.
The folder includes tips for both staff and visitors on helping the patient to avoid a fall, as well as advice for the patient on safe footwear.
Mrs Gemmell says the advice has led to all patients having their falls risk identified at an early stage, reducing the number of further falls both at home and in hospital.
Patients regularly give their opinion on the folders and format. A formal audit recently carried out by the trust has led to changes in the next 1,000 folders to include information on the management of delirium and dementia for patients, staff and families.
The audit showed that the folder has helped to improve the clinical pathway by enhancing communication and informing the clinical picture of patients for the multidisciplinary team.
Patients and their families have given their full support to the folder, she says. Their comments include:
‘I now know the difference between an occupational therapist and physiotherapist and what they do for me’ and ‘The folder is a great aide-memoire’.

Mrs Gemmell is pleased with how the folder is currently being used. But she would like to see it develop both in non-acute and acute settings.
‘The main part of the folder and the dividers are printed in advance but the actual content still needs to be printed manually and put in the folder by physiotherapists and occupational therapists,’ she explains.
‘This is not something that happens yet in the acute setting.’
Although intermediate carers have access to the folder when patients leave the hospital, she says, it often gets lost or left behind if a patient is readmitted. At present, patients are given a new folder each time they come back to hospital.

In the long term, she hopes it will also be used by medical professionals visiting patients at home.
‘I would ideally like to see it become like a passport,’ she says, ‘so that the physiotherapist visiting the patient in their home does not have to give yet another exercise and rehabilitation programme, and if the patient comes back into hospital the folder comes with them.’
It’s not just patients at Lurgan hospital who should benefit, according to Teresa Ross, head of the physiotherapy profession in the Southern Health and Social Care Trust. She praised Angela on her achievement in improving patient engagement and involvement, adding:
‘This innovative practice can be shared and rolled out to other areas within the trust, regionally and nationally. User involvement has been a key focus in the success of this work and Angela has been an ambassador for implementing the patient and public engagement ethos of the trust.’ fl