Thousands of people will join a march in London on 18 October to call for a pay rise in the NHS and beyond. Why don’t you join us? 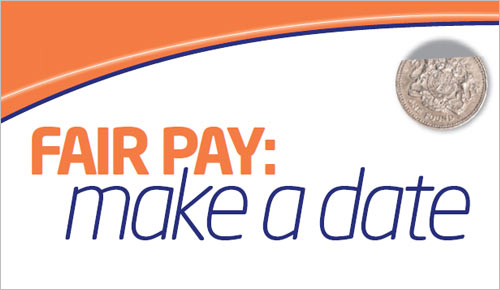 Join the march on 18 October

In just six weeks thousands of people will gather in central London for the TUC’s national demonstration and rally under the banner of ‘Britain needs a pay rise’. Among them will be CSP chief executive Karen Middleton, CSP Council members and CSP staff. Members from a variety of sectors – from managers to students to retired physiotherapy staff – will be in London on Saturday 18 October.

The CSP group expects to march alongside other health workers and their unions to call for pay to be raised for all workers – including the NHS, and those employed by private and third sector health employers – to underpin a sustainable and fair economic recovery.

There is a strong link between fair pay, quality employment and quality services – including physiotherapy services. And as people have more money in their pockets and secure jobs they will spend more on services and goods, boosting the economy and the government tax receipts needed to fund health and other essential services.

Rising prosperity for all people also means poverty, deprivation and other ‘social determinants’ of ill-health will recede. Ultimately the beneficiaries will be our patients, and the nation’s wellbeing.

That’s why the CSP wants to see a strong, diverse turnout in London on the third Saturday of October to send a powerful signal to all decision-makers, including politicians of all parties, that we need an alternative that ensures that, as growth returns, everyone living in the UK benefits.

The CSP will be there with banners, flags and dirigibles. It will be a safe, fun, family day out. A chance to show you care about your communities, your friends and family.

Worried about your pay?

Three things you can do

I will be supporting the fight for improvements in healthcare provision, increased funding and a better future for everyone. This is our time to show we care. Tom, student, Aberdeen

I am planning to march to raise awareness of the work done by physiotherapists and also to say that if people are given a pay rise they will be less likely to take time off work, thus increasing productivity.  Lucy, newly-qualified physio, Chesterfield

The TUC tells us that one in five people are earning less than the minimum wage and 6.1 million people in working households are in poverty. This tells me that Britain indeed does need a pay rise. Although these are just statistics and as physiotherapists we are always asked to question statistics, I believe that we see daily evidence of these in our working lives. Pamela, lecturer, Barnsley

I am going on the march to demonstrate against the continuing privatisation of the NHS and the detrimental effect it is having on patients and employees. I’ll also be marching in solidarity with physiotherapy and other NHS staff facing an unprecedented attack on their pay, terms and conditions. Juliet, retired member, Cockermouth

I want the government to know how unhappy I am that they don’t think that staff in the public sector are worth a pay rise! The harder you work, the more the government take you for granted! They don’t care about the people of Britain! Stop punishing us and tackle the bankers and the companies that abuse our tax system.  Louise, physio assistant, Pontypool

Our concerns are not being heard by the government. This is one way to get through to them. They will not be winning my vote at the next election if they can not and will not understand or address my concerns. Visha, physiotherapist, Basildon

I’ll be there to support the TUC and to help highlight the appalling treatment by this government of public sector workers. Leighton, physiotherapist, Newport

I’m going to let the government know that the NHS deserves fair pay for their hard work and dedication in saving lives. Peter, physiotherapist, Cheshire