Robert Millett meets the physios from north Staffordshire who are using innovative partnerships to make cardiac rehab available to a wide group of patients. 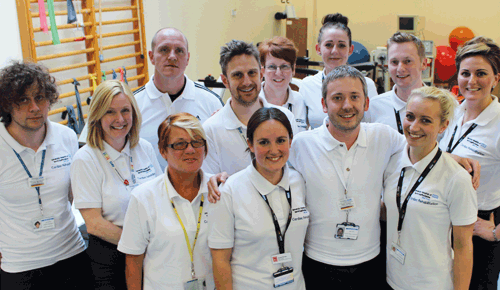 The 15-strong clinical team includes physiotherapists, nurses and exercise physiologists; with additional support from pharmacists and cardiologists
Patients receiving cardiac rehab in north Staffordshire are benefiting from long-term management and an integrated care pathway, thanks to an award-wining service that links with community organisations.
The service, part of the University Hospital of North Staffordshire NHS trust, provides cardiac rehab for patients across the region.
The 15-strong clinical team includes physiotherapists, nurses and exercise physiologists; with additional support from pharmacists and cardiologists.
Since 2012 the team have been providing cardiac rehab in the community to a wide group of patients, including many people they wouldn’t previously have seen. Prior to a service redevelopment the trust only offered cardiac rehab to patients who had experienced a myocardial infarction or cardiac surgery.
But following recommendations made by the Department of Health, the National Institute for Health and Care Excellence and the British Association for Cardiovascular Prevention and Rehabilitation, eligibility for the service was widened to include a range of cardiac patients who could benefit from intervention.
At the same time the service also established innovative links with community organisations, including the local council and public, private and charitable bodies.
As a result physiotherapist Paul Stern, lead practitioner for heart failure and cardiac rehab, says the team can now provide patients with a smooth transition into long-term management.
‘Initially we only saw patients who had heart attacks or a procedure like bypass surgery, but now we will see anyone with a cardiac indication,’ he says.
This means cardiac rehab is now available to patients with heart failure, stable angina, acute coronary syndrome and those who have been fitted with implantable devices, such as pacemakers or defibrillators. In addition, people who have been identified as having cardiac risk factors can now be referred to the service.
‘Someone with a pacemaker would not previously have been considered for the programme and would have just gone home after surgery,’ says Mr Stern.
‘They may have had some advice from nursing staff or from their GP, but they wouldn’t have received any outpatient rehab or input from our team. Similarly there was nothing offered to heart failure patients, they were just managed medically and told to get on with it.’

As well as widening its inclusion criteria for patients the service has also expanded its geographical reach. In addition to providing a hospital-based clinic, it now delivers rehab at eight different community-based venues.
Mr Stern says this has made the service far more accessible, increased the number of patients accepting rehab and improved completion rates.
‘What was happening previously is that patients were having to travel in to hospital from quite remote locations, about 15 miles away,’ he says.
‘But now we go out to them, so they only have to travel a few miles.’
Use of the community venues was made possible thanks to a unique partnership with Stoke-on-Trent city council. The collaboration allows patients to join the council-commissioned Lifestyle Service while also attending the trust’s cardiac rehab programme.
The council’s Lifestyle Service has been running since 2008 and aims to help people improve their health and wellbeing.
‘We could only ever offer patients an eight week rehab programme, but by linking in with the council’s service we’ve been able to extend that to a 20 week programme’ says Mr Stern.
Senior physiotherapist Sonya Meigh says similar partnerships have been set up with local charities, such as Brighter Futures, which provide patients with added support  such as counselling, socio-economic advice and holistic care.
‘Having the ability to refer elsewhere and to link with charity and community organisations means we can deal with patients’ wider needs,’ says Ms Meigh.
‘If they have issues around psychosocial health, stress, finances or even housing, we can point patients in the right direction. So as well as dealing with their cardiac condition, in some cases, we are also helping to keep people in their home or to maintain their own independence.’
Access to the community venues also provides patients with extra facilities, which means that in addition to traditional gym-based exercise they can benefit from water-based rehab and classes that are designed to mimic daily activities and facilitate independence.
‘Linking with private and public gyms enables us to offer patients access to pools and to venues like dance studios where we can provide functional classes,’ says Ms Meigh.
The team runs exercise sessions once a week at each community venue, with patients participating for from 20 minutes to an hour, depending on their capabilities. The sessions run throughout the day and focus on cardiovascular aerobic conditioning and resistant weight training. And patients also have the opportunity to use the gym and leisure facilities at other times.
‘Most of the venues we use have staff that are already trained in cardiac rehab, so the exercise is structured, and patients are encouraged to go in on additional days,’ says Mr Stern.

The team’s innovative approach was recognised last year when the service won a patient safety and care award in 2014, from the Health Service Journal in association with the Nursing Times.
Every patient on the programme also receives a satisfaction questionnaire and Mr Stern says the feedback has been ‘fantastic’.
‘We have seen completion rates for the programme increase and we’ve seen more patients accepting rehab, and I think a lot of that has to do with providing rehab closer to their homes,’ he says.
The team are now working on a web-based initiative, which will enable patients to complete the rehab programme virtually. Patients will be able to access online information about their diagnosis, take part in group forums, access video libraries and communicate online with the cardiac rehab team.
The web resource aims to make the rehab programme even more convenient for patients, especially for those that live in remote areas or who may be house-bound or returning to work. fl