Louise Hunt reports on an ambitious physio-led project that aims to enhance the wellbeing of people in the Bristol area who have been diagnosed with cancer. 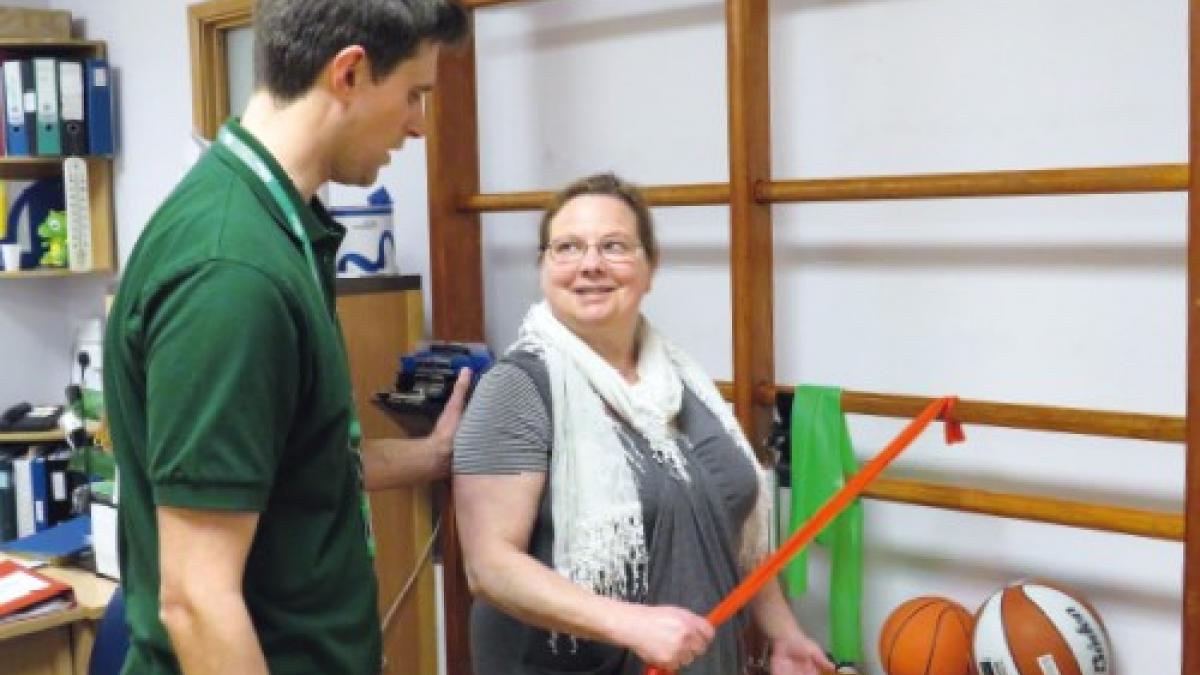 The number of people living with cancer in the UK has risen by 400,000 in the last five years, taking the total number to 2.5 million. While more than half of those receiving a cancer diagnosis can expect to live 10 years or more, one in four will experience at least one physical or psychosocial side-effect of treatment.
A recently-commissioned physio-led cancer rehabilitation project at University Hospitals Bristol NHS Trust (UHBT), funded by charity Macmillan Cancer Support, aims to improve the prehabilitation and rehabilitation services for cancer patients in both the health and social care sectors.
‘At first I was frightened to death of walking after my operation, I thought I was going to fall apart,’ says Ange, 62, who was diagnosed with ovarian cancer in January during surgery for bowel problems. Afterwards, Ange (who asked for her surname to be withheld) was referred to a new prehabilitation programme developed by Tom Cave, a band-7 physio who is on secondment as Macmillan allied health professional (AHP) cancer rehabilitation project lead at UHBT, one of the first roles of its kind in the UK.
Launched in February and scheduled to run until next June, the pilot is currently open to patients with gynaecological and thoracic cancers. Mr Cave explains that the prehab programme aims to enhance the resilience of those receiving chemotherapy or surgery. ‘We want them to be in the best condition to face the physical and psychological consequences of the disease and its treatment. The aim is to reduce complications, length of stay and the need for additional health and social care intervention.’

At home awaiting chemotherapy prior an operation on her tumour, Ange receives weekly phone calls from Macmillan rehab therapy technician Lauren Padfield, who is also based at UHBT. Ms Padfield encourages Ange to stay active and keep an eye on her condition. ‘I tell Lauren I’m pottering around my yard and going up and down the stairs all the time,’ says Ange. ‘They are trying to build me up for my next operation. I know I’ve got to have it done, but I’m nervous in any case,’ she adds. The telephone contact helps keep Ange’s spirits up. ‘It’s like talking to a friend; we talk about exercise but then we might talk about shopping. We have a good chinwag and it feels like I’m not just a patient and that’s comforting,’ says Ange who lives alone with her dog.
The support is during treatment and up to 12 weeks’ follow-up post-treatment. Ange is already thinking ahead and setting herself positive long-term goals: ‘I’m going to book a Caribbean cruise for next January to go with my sister and brother-in-law. I’ve already got an evening dress, so I’m all set,’ she says.
The prehab project is one of three pilots being trialled under the Macmillan cancer rehabilitation programme. The business case for the project was made by physios Cate Mitchell and Catherine Neck, who specialise in cancer rehab in the region, with Macmillan partnership quality manager for the south west Maggie Crowe, on the basis that it will help the trust to meet the NHS England Cancer Taskforce Strategy commitment of offering every patient with cancer a recovery package.
‘This is a package of measures designed by Macmillan to meet the needs of people who are living for longer after a cancer diagnosis who may have ongoing physical and psychological needs,’ says Mr Cave. As part of his two-year Macmillan-funded secondment, which he took up last July, Mr Cave is mapping current provision of AHP services for patients with cancer. ‘I am looking at where the unmet needs are. Patients receive so much intervention during treatment, but once treatment finishes it can be like stepping off the edge of a cliff,’ says Mr Cave, who was previously a band-6 rotational physio with an interest in oncology and palliative care.
‘From talking to patients, I identified that fatigue and physical activity are their main concerns, so we have developed three separate programmes in the project.’ From this a second pilot programme began in March, addressing cancer-related fatigue. It’s open to patients with any cancer type, but not those undergoing active treatment.

The 12-week group programme includes an hour-long discussion on managing fatigue from a clinical psychologist, and a 45-minute physical activity session in the gym. ‘Physios are there to facilitate and advise, but patients set their own activities and pace,’ says Mr Cave. ‘There is evidence that the more active people are the better able they are to control their fatigue during and after cancer treatment.’
Patients are encouraged to share stories and build social networks, as people who have had cancer can often feel isolated afterwards, he adds. The programme, which is paced to build self-management skills, starts with weekly sessions and ends with a four-week interval between the last two sessions. This structure is based on physio Victoria Salmon’s 12-week model for treating rheumatoid arthritis fatigue through physical activity.
‘We hope that it will enable patients to move forward with their goals, we’ve got a range of ages in the group, some people want to cope better with their working lives, others are retired and want to be able to enjoy their grandchildren,’ says Mr Cave. ‘I would envisage this service would help people to get back to work and make positive changes. Like with chronic pain, the symptoms might not go away but it can improve quality of life. And if they are able to cope better they won’t be going back to GPs or specialists unless it’s a crisis situation.’
The third programme is a therapy treatment support service. That offers telephone triage for patients on active treatment. ‘Lauren and I receive referrals and give advice, which could be anything from issues with mobility, breathlessness or fatigue,’ says Mr Cave. ‘We see patients one-to-one [support] if, for example, they are having treatment and have lost movement, and we can give physiotherapy for a maximum of three sessions and refer them onto a general musculoskeletal service if they need more,’ Mr Cave explains.
The team can also issue basic equipment or refer onto other services such as dieticians and psychologists. With the three pilots it is the first time that the trust has been able to provide the different phases of cancer rehab – before, during and after therapy – on a simultaneous basis. ‘In the past there were pilots doing different aspects, but they were happening in isolation and there was often quite a waiting list. Our overarching aim is to be able to provide information and intervention to patients at the right time,’ says Mr Cave.
Cancer rehabilitation should be sustainable, he says. ‘My ambition is that this isn’t just another pilot programme and that it becomes a sustainable service within health and social care that could be mirrored around the country.’
Mr Cave works closely with Emma Ryan, a Macmillan-funded living well and beyond cancer project manager with the Bristol clinical commissioning group (CCG). The hope is that if this suite of programmes will become part of a stratified pathway funded through tariffs in the future. When the project ends, evidence will be presented to the trust and Bristol CCG to establish whether the service should be rolled out more widely.
For physios, Mr Cave believes that prehab is an area with growing potential. ‘If it works for patients with cancer, then hopefully there are parallels that could transfer quickly to other areas,’ he suggests. fl

What is a recovery package?

Designed by Macmillan, the recovery package is a series of key interventions which, when delivered together, can greatly improve outcomes for people living with and beyond cancer.
The National Cancer Survivorship Initiative, which was set up in 2008, has developed and tested a number of key interventions, together called the recovery package. Its Living with and beyond cancer: taking action to improve outcomes report emphasises the importance of the recovery package in achieving better outcomes. See here as  it highlights that people will have greater wellbeing, and their demand for services will be lower, if they get the support that is relevant to their particular needs, and which promotes healthier lifestyles and independence.

The recovery package is made up of the following elements