Beyond the comfort zone: chair of council Catherine Pope 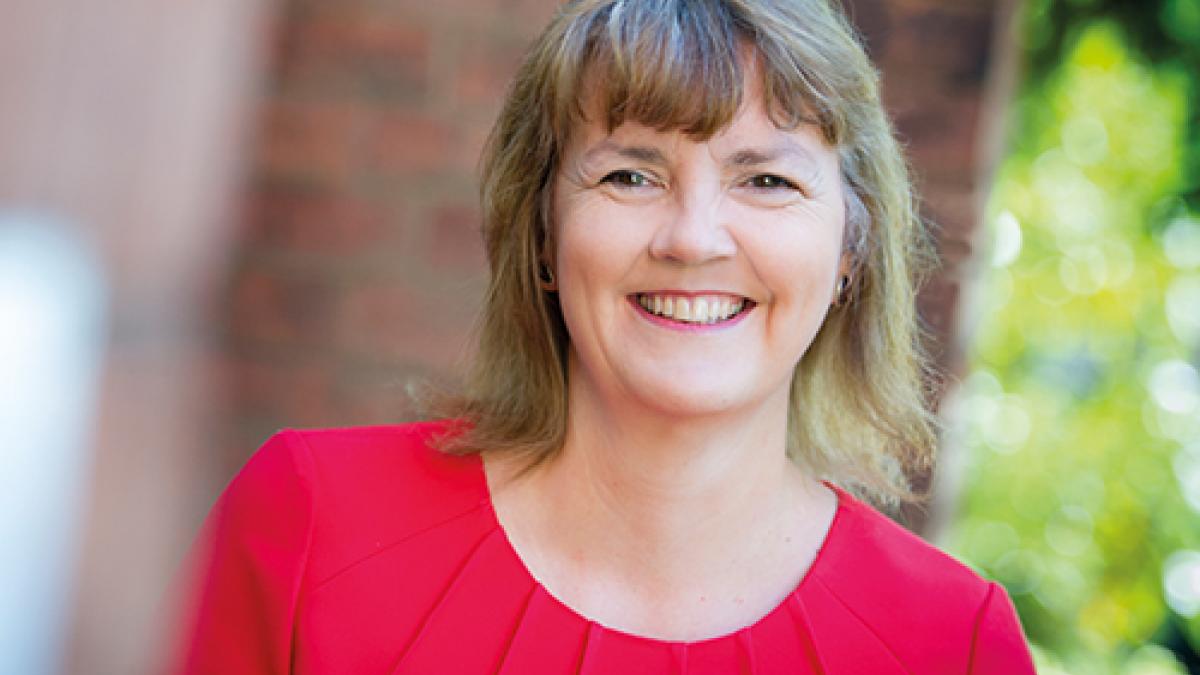 One of the things you can’t help but notice about Catherine Pope is her infectious and self-effacing giggle. It punctuates her conversation, bringing warmth to the serious messages she needs to convey. But, if the CSP’s incoming chair seems light hearted and approachable, it’s soon clear there’s a tough cookie underneath. In fact, her whole ethos is about pushing herself beyond her comfort zone.
As a manager, she knows how to manage a difficult situation and has the guts to do what has to be done, including having to make staff redundant. And as a mother she’s successfully raised two children who have carved out successful careers for themselves.
‘I was so conscious how being shy held me back as a teenager, so I really pushed them,’ Catherine admits. ‘I had a really sheltered upbringing and had no idea what life was like for other people. But things happen to you that make you realise you are a strong person in your own right.’

Catherine’s career as a musculoskeletal (MSK) physio began in the mid-1980s, during the early years of the Thatcher government and the miners’ strike. She had studied at a private convent school in Twickenham, south west London (where she gained a free place after passing the 11-plus examination) before training at the nearby West Middlesex Hospital.
Describing herself as a union activist, socialist and feminist, Catherine acknowledges she is almost unrecognisable from her younger self.
Things changed when her husband, also a physio, got a lecturer’s job at the University of Nottingham. (Grahame also happens to have been chair of CSP before her, but more of that later.)
‘It was only when I moved to Nottingham that I realised what closing a coalmine meant to a whole community. Living on the outskirts of London you just think, well get another job. And – a bit embarrassingly  – I did vote for Margaret Thatcher, on the basis that she was a woman,’ she chuckles.
As well as stepping outside the comforts of south east England, Catherine pushed the boundaries of her personal comfort zone.
She wanted to work in MSK outpatients but, with two young children, it was hard to get a senior part-time job in Nottingham. A post came up at a newly-opened dementia unit, and that proved the turning point in Catherine’s fledgling career.
‘One of the first patients I treated was a gentleman who had a frozen shoulder. He had been to the outpatients’ department but hadn’t taken in what he needed to do and they discharged him. I sat and talked to him for about 45 minutes and it really made a difference to him.
‘I realised that if I didn’t help some of those patients no-one would. From then on I found mental health so much more rewarding.’
It was around the same time that she embarked on  a part- time master’s degree in social policy and administration.
‘It didn’t feel like work at all, as I loved it,’ she says. ‘I’d be writing my essays while watching the kids at their swimming lessons.’ (Nowadays you’re likely to find her knitting in a spare moment, especially while she is on long train journeys.)

Road to the top

The master’s put her on the road to promotion. Initially, she  managed 25 physios, and is now associate director for nearly 1,000 allied health professionals in Nottinghamshire Healthcare NHS Trust. Is managing people who aren’t physios one more step outside her comfort zone?
‘I’ve learned that I can no longer manage by expertise. I don’t know how to run a ward or know what a nurse would be allowed to do. You have to ask the people you are managing what the options are, rather than coming up with an answer yourself. It’s more about listening to help solve a problem rather than telling people what to do.’
Catherine is a passionate advocate of the value of physiotherapy in mental health settings. In 2005, she led a CSP campaign for physiotherapy in mental health settings after Oxleas Hospital in south east London announced it would no longer employ any physios. The hospital argued physios weren’t named in the new national service framework as a core service.
‘We started firing off letters everywhere – even the prime minister! We even went to see someone at the Department of Health (DH) which was very exciting. I think the CSP said hang on let’s do this in a co-ordinated way.’ (She laughs again.)
The upshot was that the service was maintained, albeit at lower levels. More importantly, a later DH document said people in acute mental health hospitals had to have access to physical healthcare, including physiotherapy.

Looking in the mirror

Pushing beyond her comfort zones includes going on an impressive list of management courses, one being the women-only Athena leadership course run by the King’s Fund. She loved it. ‘I met some amazing women leaders and managers. It taught me how to keep true to my values while still being an effective manager.’
Catherine openly admits that sometimes being a manager is ‘horrible’, such as having to make staff in a highly specialist speech and language service redundant.
‘It was the most expensive service in the country and the commissioners couldn’t afford it. We had to make some people redundant who had built it up from scratch. That was the most horrible thing I had to do.
‘But I have to be able to look in the mirror and say I have done the right thing for the most patients. It was a great service, but only for a very few patients.’
So, as incoming chair, what boundaries can we expect Catherine to be pushing in her two-year tenure?
‘At the end of the two years I’d like to feel that more members were engaged, and that it wasn’t quite such an onerous thing to be engaged,’ she says. ‘At the moment, there are too many meetings and committees and it’s all very bureaucratic.’

Best for the patient

And while Catherine’s experience has primarily been in the NHS she wants to make sure the CSP engages every member, wherever they work. ‘I think what I learned from that is we are all trying to do the best for the patient.
As for husband Grahame, CSP chair from 2003-2005, how much will she be seeking his guidance? Catherine had previously joked that she felt a bit like Hillary Clinton. What did she mean?
‘Well, I have a high opinion of women like Hillary Clinton and Cherie Blair – really high achieving women who were overshadowed by what their husbands wanted to do.
‘I’m really proud of what Grahame achieved, but I’m doing this because I want to be chair. It just so happens I’m married to someone else who wanted it as well.
‘The advantage is that I’m going in with my eyes completely open – and determined to show I am my own person.'